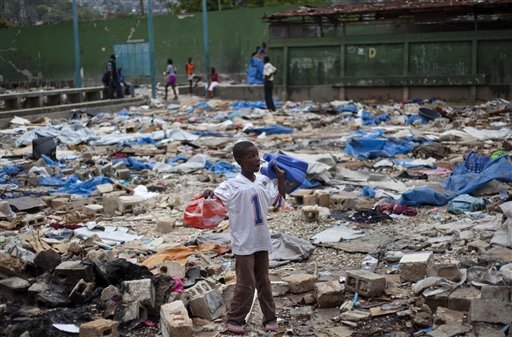 UNITED NATIONS (AP) — A Boston-based human rights group said Wednesday it will sue the United Nations in 60 days if the world body does not agree to compensate Haitian cholera victims, apologize to the Caribbean nation for introducing the disease through its peacekeeping force, and launch a major effort to improve sanitation.

Lawyers for the Institute for Justice and Democracy in Haiti said they hoped to be able to settle with the United Nations but are ready to go to court in New York if that fails.

The announcement was the group's response to a U.N. letter in February saying it is legally immune and was not responsible for the cholera outbreak that has sickened nearly 500,000 people and killed over 7,750 people since the outbreak began in October 2010.

The Institute for Justice and Democracy in Haiti cites independent studies suggesting that the disease was inadvertently brought to Haiti by a U.N. peacekeeping battalion from Nepal, where cholera is endemic. A local contractor failed to properly sanitize the waste of a U.N. base, and the bacteria leaked into a tributary of one of Haiti's biggest rivers, according to one study by a U.N.-appointed panel.

Haiti's cholera epidemic followed a Jan. 12, 2010 earthquake that killed 316,000 people and displaced more than a million others.

Brian Concannon, the institute's director, said the U.N. asserted its immunity in its recent letter.

"They may have immunity, but they don't have impunity," said Ira Kurzban, another lawyer preparing the lawsuit.

Concannon and Kurzban said they are operating on the legal principle that if the United Nations does not respond to appeals for justice, and leaves the plaintiffs with no legal recourse, the U.N. loses its immunity.

The U.N.-installed water system pumped sewage directed into the river, and "This was the system's normal operation," said Concannon.

Haiti had not had a problem with cholera since the 1800s until the 2010 outbreak, said Dr. Jean Ford Figaro, a Haitian doctor speaking for the lawsuit. He said the death toll has now surpassed 8,000, citing Haitian Health Ministry figures.

UCLA's School of Public Health sent a field mission to Haiti after the outbreak to study its origin. One of the school's professors, Renaud Piarroux, later wrote that the study confirmed the epidemic was imported and started around the Nepalese peacekeepers' camp, then "spread explosively due to massive contamination of the water."

A study of the bacteria conducted in 2010 by scientists at Pacific Biosciences of California Inc. mapped its genome, the set of genes that makes any organism unique. The Haitian strain is almost identical to types found in South Asia and differs greatly from those circulating in nearby Latin America, according to the analysis published in the New England Journal of Medicine. That suggested humans carried the Asian strain into Haiti, though it did not pinpoint the country of origin.

Concannon said that if there is no settlement, the Institute for Justice and Democracy in Haiti will take the United Nations to court in 60 days. He told the AP that they will probably sue in New York State court initially, and anticipated that the United Nations will counter by saying the case should go to U.S. federal court.

He and Kurzban said they are also planning a lawsuit in a European venue.

The institute is seeking a minimum of $100,000 for each bereaved family and $50,000 for each cholera survivor. It has at least 8,000 people ready to join the lawsuit, Concannon said.

When the original compensation claim was filed with the secretary-general and the claims unit for the U.N. peacekeeping mission in Haiti in 2011, Concannon said he hoped the U.N. peacekeeping force would create a lifesaving program that would provide sanitation, potable water and medical treatment. He also said he wanted a public apology for the victims.

In December, Ban announced a $2.27 billion initiative to help eradicate cholera in Haiti and the Dominican Republic, which share the island of Hispaniola, and vowed to work aggressively to secure donations for the ambitious but still mostly unfunded 10-year plan.

"It's currently an initiative that doesn't look like it's going to make a difference," Concannon said.

He noted that the United Nations is only putting up about 1 to 2 percent of the funds for that plan, and said it was an initiative launched just six week after the institute had filed its initial claim.

Ban's spokesman, Martin Nesirky, has said that the secretary-general "again expresses his profound sympathy for the terrible suffering caused by the cholera epidemic, and calls on all partners in Haiti and the international community to work together to ensure better health and a better future for the people of Haiti."