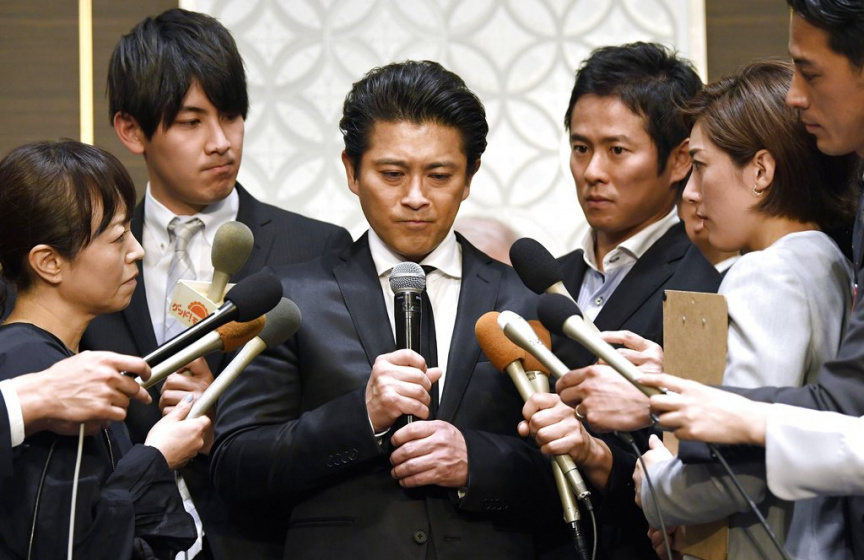 A member of Japanese pop group Tokio, Tatsuya Yamaguchi attends a press conference Thursday, April 26, 2018, in Tokyo. Yamaguchi acknowledged Thursday that he is facing a criminal investigation related to an allegedly indecent act with a teenage girl. (Daisuke Suzuki/Kyodo News via AP )

TOKYO (AP) — A Japanese actress who won a settlement last week from a director she said sexually harassed her said Friday that she plans to use the money to start a #MeToo group for Japan's entertainment industry.

"I don't know any theater groups that don't have power or sexual harassment," the 20-year-old actress, who goes by the name Chino, told reporters at a Tokyo courthouse.

Chino, leader of the Tokyo-based theater troupe TremendousCircus, said she came forward because she wanted to be a role model for other victims.

"Was it hard? Was I afraid? Of course I was. But I came forward for the sake of others who may also want to pursue their dreams," she said.

According to the April 17 settlement, signed by both sides, director Mikiya Ichihara took her to a karaoke parlor in 2015, when she was still a high school student, touched her shoulders and thighs, and made obscene remarks, promising to land her roles.

She was shocked, she recalled, ran away in a daze and wept for hours.

Ichihara paid several hundreds of thousands of yen (thousands of dollars) to Chino, under the settlement. The exact amount was not disclosed. They were in negotiations since January, according to Chino's lawyer.

"I apologize from the bottom of my heart to Chino, who suffered so much both mentally and physically because of my sexual harassment," Ichihara said in a statement.

Victims of sexual misconduct in Japan rarely go public because they often face a social backlash.

Chino chose to come forward late last year with the allegations, first on Twitter, after seeing the #MeToo movement abroad. She was surprised that at least five others alleged they had been harassed by Ichihara.

Earlier this week, Tatsuya Yamaguchi of the popular pop group Tokio, tearfully apologized in a news conference, televised live by national broadcasters, for forcibly kissing a teenage girl at his home. He suspended his work with the band and other projects.

Junichi Fukuda, a finance ministry bureaucrat, resigned last week over sexually suggestive remarks to a female reporter, which were published by a magazine. The governor of Niigata prefecture has also stepped down after acknowledging he paid cash for sex.

The ministry acknowledged Friday its investigation had found sexual harassment. Initially, the bureaucrat had denied harassment, although his statements had flip-flopped.

The ministry said he had damaged the credibility of his post and caused confusion in Parliament, which has been deadlocked as opposition lawmakers demand the resignation of Finance Minister Taro Aso. The ministry slapped a 20 percent pay cut for six months on the bureaucrat. The opposition slammed that as too little.

Just as Hollywood has seen an upsurge of protest against sexual harassment, Japan's entertainment world may be on a cusp of change, although far more gradual.

En Tanaka, a script writer and director at TremendousCircus, noted that sexual and power harassment was common in Japanese entertainment, as almost all directors are male, and there are few acting roles for women.

Chino's new group aims to stop sexual and power harassment in Japan's theater, film and entertainment industries, and offer counseling and legal help for victims, with the goal of showing that speaking out comes with no repercussions, Tanaka and Chino said.

"We want to build for the future," Chino's lawyer Izutaro Managi said. "This effort should be meaningful for perpetrators, as well as for victims."

Her work can be found at https://www.apnews.com/search/yuri%20kageyama

On #MeToo anniversary, leaders focus is on inequality