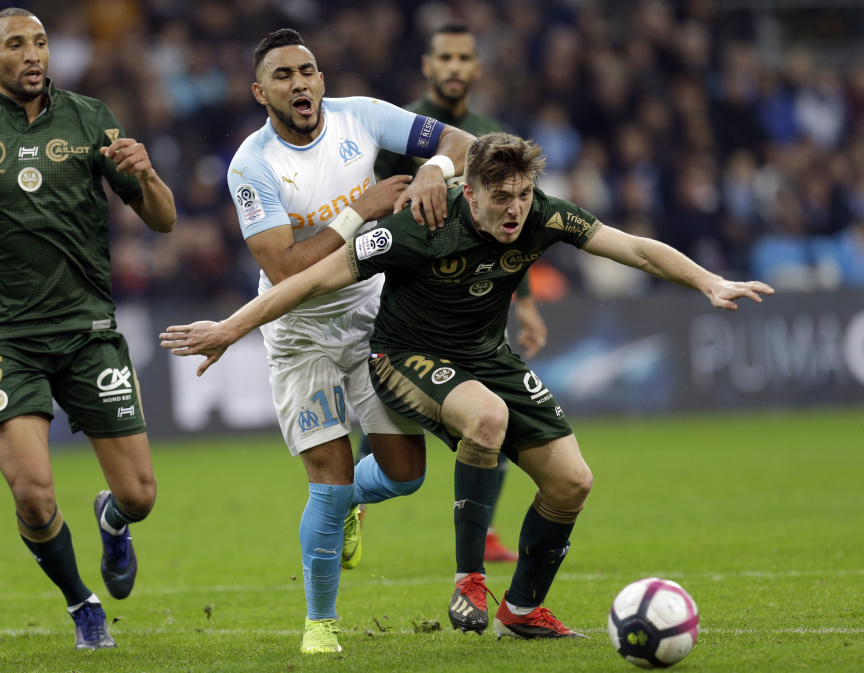 Marseille's Dimitri Payet, left, challenges for the ball with Reims'Thomas Foket, during the League One soccer match between Marseille and Reims at the Velodrome stadium, in Marseille, southern France, Sunday, Dec. 2, 2018. (AP Photo/Claude Paris)

PARIS (AP) — Bordeaux held Paris Saint-Germain to a 2-2 draw on Sunday to finally end the runaway leader's streak of 14 straight wins to start the season in the French league.

PSG twice took the lead, through star forwards Neymar and Kylian Mbappe. But substitute Andreas Cornelius leveled for the hosts with a fine glancing header from a cross in the 84th minute.

Neymar gave PSG the lead in the 34th with a neat volley from inside the penalty area, but went off around 10 minutes into the second half and headed straight to the dressing room. It was not immediately clear if he had picked up an injury. Neymar exited with an apparent groin injury during Brazil's friendly match against Cameroon on Nov. 20.

"I think it is (the same injury)," PSG coach Thomas Tuchel said. "We have to be very attentive. The pitch was very hard to play on."

Tuchel said Neymar is expected to miss Wednesday night's match away to Strasbourg.

"I hope he is ready to play against Montpellier (on Saturday)," Tuchel added.

Neymar's 11th league goal of the season went to a video review before being awarded. It seemed harsh on Bordeaux, considering Mbappe appeared marginally offside and to be slightly obscuring the view of goalkeeper Benoit Costil when the ball went in.

After veteran forward Jimmy Briand equalized with a well-worked goal in the 54th minute, Mbappe sprinted through to collect Julian Draxler's pass and slot home the second in the 66th.

"We wanted to beat them. We can be proud of the fact we're the first team to take points from them," Briand said. "We tried to be aggressive, because we know they don't like it."

PSG could have scored more with winger Angel Di Maria hitting the post and the crossbar. But slack defending allowed Cornelius enough space to salvage a point for 11th-place Bordeaux.

"It was a very tight game. They were very strong tactically," PSG defender Marquinhos said. "They deserved it, they played the right way."

Following a crushing defeat in the Europa League, Marseille slipped up again when it drew 0-0 at home to Reims.

Marseille lost 4-0 at Eintracht Frankfurt on Thursday to go bottom of its Europa League group, having reached the final of the competition last season.

Confidence seemed to be affected as Marseille labored against Reims and top scorer Florian Thauvin was kept quiet. Playmaker Dimitri Payet had a free kick well saved as Marseille dropped points in its quest to qualify for next season's Champions League.

The draw leaves Marseille in fifth place, one point behind fourth-place Lille, while Reims is ninth.

Strasbourg moved up to eighth with an emphatic 4-1 win at Rennes after conceding early.

Rennes led 1-0 thanks to forward Ismaila Sarr's early goal, but Alsace side Strasbourg hit back with two penalties from midfielder Jonas Martin and a goal each from Adrien Thomasson and Pablo Martinez.

Toulouse had its goalkeeper sent off early on and went 2-0 down before rallying to draw 2-2 at home to fellow struggler Dijon.

Baptiste Reynet was sent off in the fifth minute and substitute goalkeeper Mauro Goicoechea was immediately called into action, saving a free kick.

Dijon took the lead through Moroccan defender Nayef Aguerd. The goal was initially disallowed for offside but given after a video review.

The visitors went 2-0 up in the 68th minute through midfielder Mehdi Abeid.

Mbappe grabs another double for PSG before Man U visit