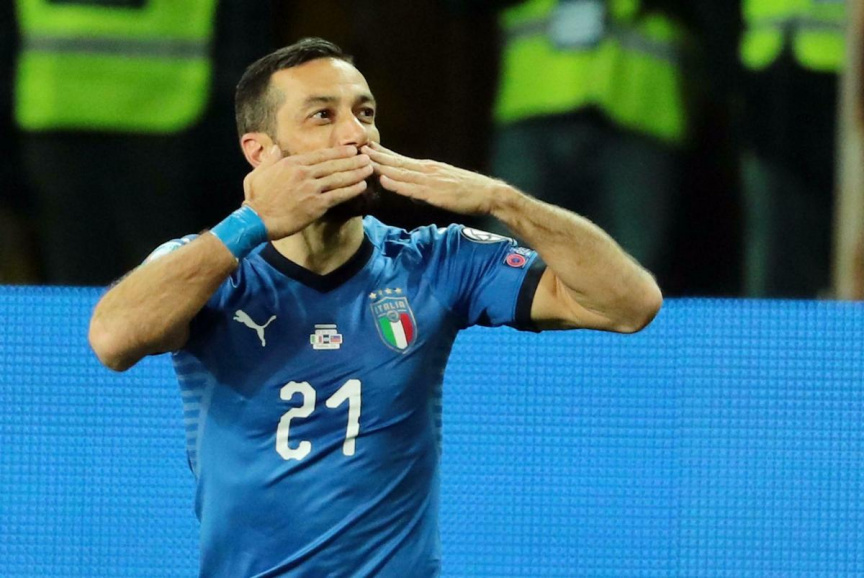 Italy and Spain both made easy work of low-ranked opposition on Tuesday as the two former European champions try to build some momentum after a disappointing year.

Spain comfortably beat Malta 2-0, while Italy did even better with a 6-0 thrashing of 10-man Liechtenstein as both teams maintained a perfect record after two matches in qualifying for the 2020 European Championship.

"Mission accomplished," Italy coach Roberto Mancini said. "It was important to score lots of goals. Our concentration levels were important. The result was never in doubt but we had to produce a good performance."

Italy is keen to restore confidence in the national side after the embarrassing failure to not reach last year's World Cup. Spain likewise wants to use the European qualifying campaign to restore its status as one of the continent's best teams after losing to a less talented Russia in the World Cup's last 16.

Tuesday's games also included two event-filled 3-3 draws capped by late equalizers. Denmark fought back from 3-0 down against Switzerland while Norway gave up a 2-0 lead against Sweden and needed an equalizer deep into injury time just to salvage a point.

Veteran forward Fabio Quagliarella became the oldest player to score for Italy as he converted two penalties for his first international goals in 8 ½ years.

The 36-year-old Quagliarella had tears in his eyes after converting his first penalty and being given a standing ovation by the fans at the Stadio Tardini.

"I will always remember this night," Quagliarella said. "I don't care about my age because I feel very good physically. I just focus on working hard and play with serenity."

Italy was 4-0 up at halftime after Quagliarella's penalties and goals from Stefano Sensi and Marco Verratti. It also started the second half with a numerical advantage after Liechtenstein defender Daniel Kaufmann was sent off.

Teenager Moise Kean netted his second goal in as many starts for Italy and 30-year-old debutant Leonardo Pavoletti capped a great night for the hosts.

Italy moved into sole lead of Group J, two points ahead of Greece and Bosnia and Herzegovina. They drew 2-2 after Greece fought back from two goals down in a match which saw Bosnia midfielder Miralem Pjanic sent off.

Armenia lost 2-0 to Finland and has zero points, along with Liechtenstein.

Alvaro Morata scored a goal in each half in a match which Spain dominated from the outset.

The Atletico Madrid forward had not scored for his country since 2017.

Luis Enrique was not with the squad because of personal problems, and assistant coach Robert Moreno was in charge during the game.

"Winning here was crucial but we had extra motivation: we wanted to win for our coach — we hope things go as well as possible for him," Morata said.

Spain has two points more than Sweden, which drew at Norway after a dramatic finale.

Norway led 2-0 but Sweden drew level four minutes from time and appeared to have completed a comeback when Robin Quaison netted in stoppage time for his third goal in two qualifiers.

However, Ola Kamara headed in a corner six minutes into injury time.

Denmark stunned Switzerland with three late goals as it came back from 3-0 down in Basel.

The visitor's first goal came in the 84th minute.

It was Denmark's first match of the campaign and left it third in Group D, three points behind Switzerland and five below Ireland which beat Georgia 1-0 thanks to a free kick from Conor Hourihane for his first international goal.