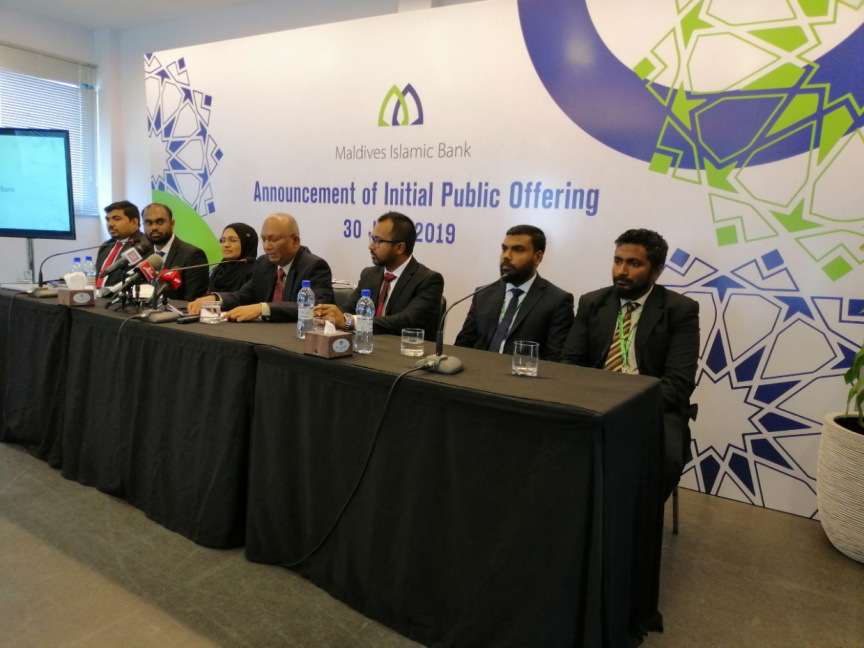 Maldives Islamic Bank (MIB) has announced an Initial Public Offering (IPO) of 31 percent of its shares at the rate of MVR 35.

MIB announced its IPO at a press conference at Maagiri Hotel this Sunday.

The bank says it expects to raise MVR 244 from the public offering.

Applications can be submitted in multiples of 10 shares with a minimum subscription of 20 shares or an amount equivalent to MVR 700.

The public offering is scheduled to open for subscriptions on July 28, and close on September 18.

Subscriptions can be made online or from any of the bank’s branches. Payments can also be made from MIB online banking, BML online banking, Dhiraagu Pay, or Ooredoo m-Faisaa.

MIB’s CFO, Ali Wasif reports anyone from any part of Maldives can subscribe for the bank’s shares with ease.

Announcing the public offering this Sunday, MIB’s Managing Director and CEO, Abul Ehtesham Abdul Muhaimen said encouraged the Maldivian people to make use of the opportunity to become shareholders of the bank.

“This bank has 80,000 customers. We invite our customers to become the bank’s stakeholders,” said Muhaimen.

The bank reports its public offering is structured and managed in association with expertise of NDBIB as financial adviser, Shah Hussain and Co. as legal counsel, and KPMG as auditor.

There are currently nine companies listed in the Maldives Stock Exchange. They are:

MIB to accept documents via email until further notice

MIB to be closed for audit