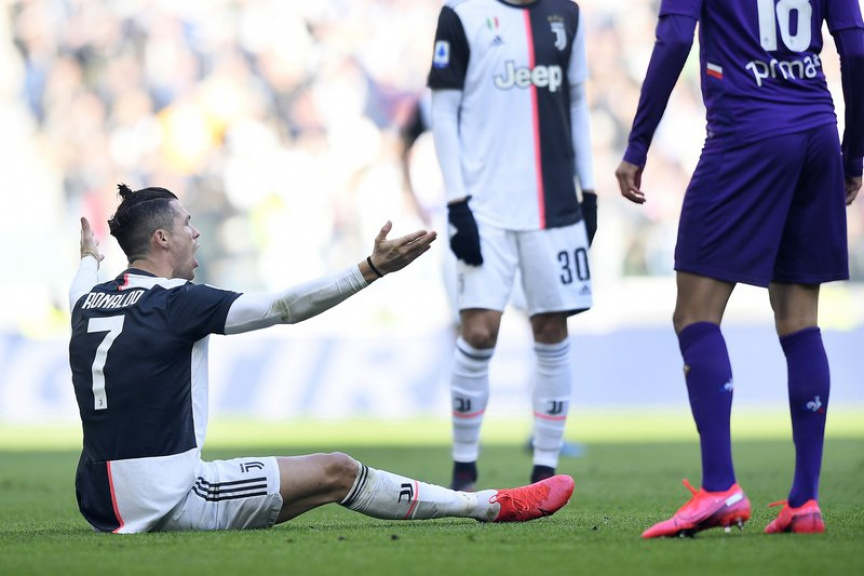 Juventus' Cristiano Ronaldo sits on the ground as he argues during a Serie A soccer match between Juventus and Fiorentina, in Turin, Italy, Sunday, Feb. 2, 2020. (Fabio Ferrari/LaPresse via AP)

SEOUL, South Korea (AP) — Compensation awarded to two South Korean fans for the cost of tickets and for so-called “mental anguish” because Cristiano Ronaldo didn’t play in a pre-season exhibition in Seoul last July is just the beginning, a Seoul-based lawyer said Wednesday.

The promoters of the exhibition between Italian giant Juventus and a K-League All Star team, advertised that Ronaldo would play for at least 45 minutes. But the Portuguese star stayed on the bench for the entire game, angering sections of the 65,000 crowd.

Korean lawyer Kim Kwang-sam says the company will face more legal action from disgruntled fans.“There are 87 people who have filed a lawsuit in the Seoul Central District Court,” Kim said, referencing soccer fans who are seeking 950,000 won ($799) each. “The amount will be bigger this time.”

The promoters did not respond to requests for comment.

Ronaldo’s failure to play, explained by coach Mauricio Sarri after the game as muscle fatigue following an exhibition in China 48 hours earlier, led to a verbal clash between the South Korean K-League and Juventus. The Italian club also arrived at the stadium late for the match, causing the kick-off to be delayed by almost one hour.

“For fans in South Korea, Ronaldo’s appearance isn’t just about contract, but a trust in Juventus with 121 years of its rich history,” the K-League said in a statement last year. “The fans expected Juventus to offer an explanation and a sincere apology for the reasons of discrediting the trust so easily, but the Juventus club even gave up its last hope.

“If Ronaldo was unable to play,” the statement said, “it would be a blatant deception to include Ronaldo as a substitute on the start list.”

Ronaldo recovers from virus and back for Juventus