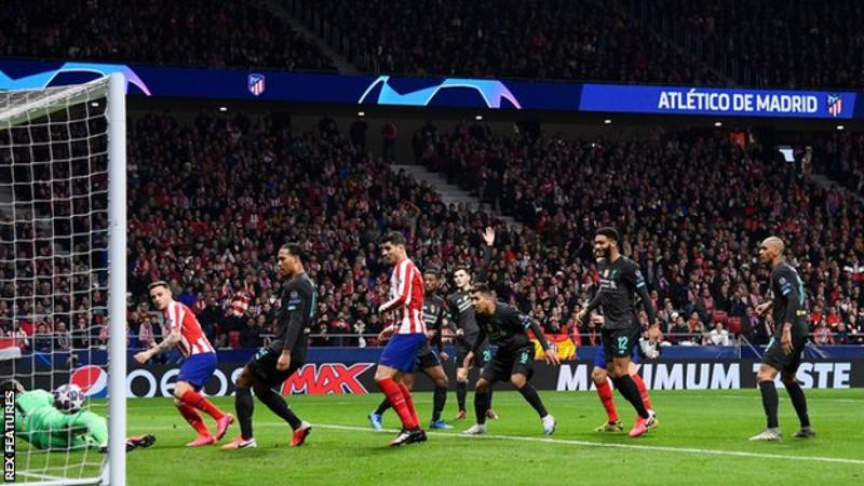 Atletico Madrid won the first leg of their last-16 tie with champions Liverpool on February 19, 2020. (Photo/BBC)

Liverpool lost against Spain's Altetico Madrid in their defence of the Champions League title, after midfielder Saul Niguez's early strike gave Atletico an aggregate lead going into the second leg of their last-16 tie at Anfield.

The Reds were outplayed by Atletico as the Spanish team who had been on a poor run of form rediscovered their tenacity as they harried and hassled throughout the match, limiting Liverpool to just two chances and zero shots on target.

Opportunities that fell to superstar Mohamed Salah, and usually reliable captain Jordan Henderson were wasted. Salah headed wide, and Henderson went even closer with a hooked shot that missed the far post.

Klopp replaced Sadio Mane and Salah with Divock Origi and Alex Oxlade-Chamberlain later on but neither made an impact.

Two-time finalists Atletico, held on to the fourth-minute lead given to them by Saul. The Spanish midfielder turned sharply to fire home after a corner came off the boot of Fabinho.

Liverpool failed to attempt a single shot on target for only the second time in their 251st match under Jurgen Klopp in all competitions.

Minutes before kick-off Klopp referred to Atletico having a similar "intense DNA" to his own side - and unfortunately for him they were at their intense best.

Liverpool faced an almost mirror image of a team that relentlessly pressed and got numbers forward on the counter, very similar to their own style.

The Reds had large spells of possession in the opposition half, but Diego Simeone's Atletico side are one of th best when it comes to dealing masters with teams of that type. The Rojiblancos forced the expected Premier League Champions into several errors when they had possession.

The return leg is on Wednesday, 11 March.