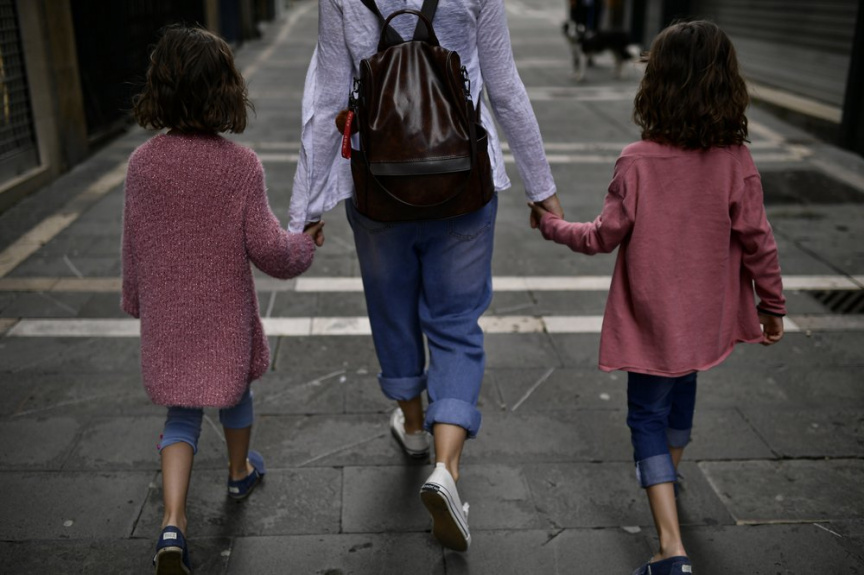 A family go for a walk taking their hands along a street of the old city, in Pamplona, northern Spain, Sunday, April 27, 2020. (AP Photo/Alvaro Barrientos)

Spain’s government lifted a home confinement rule for children under 14 years old after 44 days on Sunday, ending one of the most restrictive measures of its national lockdown to rein in a coronavirus outbreak that has claimed over 22,000 lives in the European country. Even Italy, with more deaths than Spain, has not kept its youngsters completely secluded.

“This is wonderful! I can’t believe it has been six weeks,” the 44-year-old Sabaté said in Barcelona. “My boys are very active. Today when they saw the front door and we gave them their scooters, they were thrilled.”

Sabaté’s sons wore child-size face masks as they went out. She said they were used to seeing both their parents wear them when they went out, so she believed that made it easier to convince them to put them on.

“We will see how long they last!” she said.

Gustavo Tapia, Sabaté husband, said that taking sons Tomás and Zacarías for a stroll in the neighborhood was a joy.

“It was as if we had rediscovered the street,” Tapia said. “They were really excited to see things that they had grown accustomed to seeing before. For example, when they saw a streetlight they started shouting ‘Green! Green!’ They also loved seeing ants and other insects.”

Spain’s 5.8 million children under 14 years old are now allowed to take walks once a day, accompanied by a parent for up to one hour and within a kilometer of home. Many children took out their bikes and scooters.

Kids can take one toy with them, but they are not to play with other children. They can accompany a parent on shopping outings for food, medicine or a newspaper. Parks remain closed in Barcelona and Madrid. Authorities recommend that both parents and children wash their hands before and after outings.

Authorities had resisted calls from some parents to let children outside until now, citing concerns that they could be a source of contagion even though children appear to rarely fall ill from the new virus.

The ban was lifted at 9 a.m. After a few early risers trickled out to otherwise deserted streets, many could not resist the draw of Barcelona’s beach promenade, the closest they could get to the sand that remains off-limits. Benches with views of the Mediterranean were packed with people, some of who, but not all, wore masks. Police told an Associated Press photographer that they were having difficulties enforcing the social distancing rules that families should stay a minimum of a meter apart.

Health Minister Salvador Illa said that the information he managed indicated that “the restrictions have generally been followed,” but that “we will evaluate the situation and take steps if necessary.”

Some local authorities, however, did single out rule breakers.

Valencia’s lieutenant mayor Sandra Gómez posted a video on her Twitter account showing a group of children kicking a ball together in a park, with more people huddled in the background.

“Responsibility. We have opened the parks for people to walk in pleasant areas not for soccer,” Gómez wrote. “Imagine what those (owners of) closed restaurants and shops who are making an enormous economic effort will think you are doing. Warning: what doesn’t work will be taken back.”

Spain has one of the world’s strictest lockdowns as it fights to contain one of the worst COVID-19 outbreaks that has infected over 200,000 people. Since the start of Spain’s state of emergency on March 14, adults can only leave home for essential shopping or to make unavoidable commutes to work.

The measures have helped reduce a daily contagion rate that was raging over 20% a month ago to under 1% by Sunday. That has reduced the intense pressure on hospitals that were on the brink of collapse.

Authorities have insisted that a further loosening of restrictions will depend on maintaining the positive tendency. Prime Minister Pedro Sánchez said Saturday that he plans to permit adults to go out for exercise next week.

“It is important that we carry out this step (of letting children out) with a strict compliance of the rules,” Sánchez said. “We must not underestimate the enemy we face ... Each family must act responsibly; as they have until now. If the outings are carried out according to the rules and we can confirm there are no more infections, this first relief measure will be accompanied by another one the following week.”

Parents still have no indication when schools will reopen. Only factory and construction workers are back on the job after a two-week stoppage of all industry. All non-essential retail stores are shuttered.

“It has been difficult because they have had classes online from 9 to 1 in the morning,” David Terrón, father of two boys, said on the streets of Madrid. “My wife and I are working from home and it has been very difficult to coordinate and look after them and pay attention to the clients and the boss and colleagues.”

For Terrón’s 10-year-old son Alberto, taking a walk is nice, but something is missing.

“I want this confinement to be over so we can back to school with my friends,” Alberto said.

Doctors in Madrid: ‘It’s like March in slow motion'