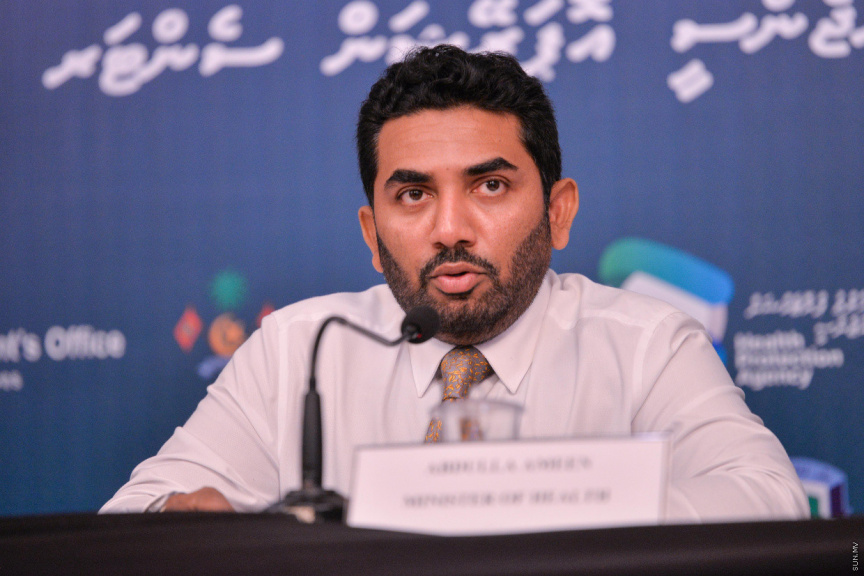 Health Minister Abdulla Ameen stated that people with symptoms of the Covid-19 virus were not fully honest and could pose a danger to the entire nation on April 9, 2020. (Sun Photo/Fayaz Moosa)

The Health Minister of Maldives has announced that the effective reproduction number of COVID-19 in the country has dropped from 3.8 to 1.4.

The reproduction number is a way of rating a disease's ability to spread. It's the number of people that one infected person will pass the virus on to, on average.

Speaking in a press conference tonight, Health Minister Abdulla Ameen said that the virus reproduction numbers in the Maldives as well as the number of contacts per positive case had been significantly decreased.

“We have decreased the rate at which the virus spreads from one person to another from 3.8 to 1.4. We have managed to reduce the spread of the virus from our work,”

“The number of contacts has also been reduced to six from 33.” Said the Minister.

New infections in the Maldives have also been reduced, as well as the number of positive cases identified from the Flu clinics and those with symptoms of the virus, said the Minister.

Compared to how the virus was first identified in the country on April 15, the number of independent cases have also been reduced, said the Minister.

How the country achieved this feat, was attributed to long-term planning, quick decisions, and the initiative of the government as well as the prioritization of the advice of health experts and doctors in the country. The Minister also said that the Maldives had taken lessons from other countries across the world, which resulted in the country being saved from a very real danger of the virus spreading out of control.

“The patience of the citizens despite the difficulties and the hard work and resilience of many, has saved us from the sudden loss of a lot of lives and a huge wave of COVID-19.” Said the Minister.