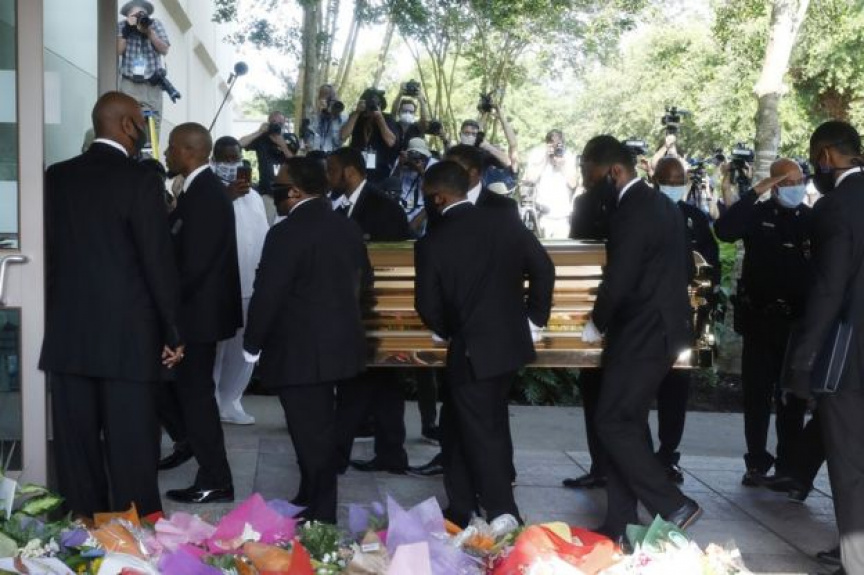 Mr. Floyd's coffin was brought back to the church on Tuesday for the service. The funereal of Mr. Floy was hedl on June 9, 2020. (Photo/Getty Images)

His coffin will be taken from a church where it was on public display on Monday, to be buried beside his mother.

Mr. Floyd died in Minneapolis in late May, as a white police officer held a knee on his neck for nearly nine minutes. His final moments were filmed on phones.

Four police officers involved have since been sacked and charged over his death.

Mr. Floyd's death was "one of the great inflection points in American history", Mr. Biden had later told CBS news. The Democratic frontrunner has also sharply criticized President Donald Trump, who is standing for re-election as the Republican candidate on November 3, accusing him of making "despicable" speculative remarks about Mr. Floyd.

The Democratic politician was himself recently accused of taking black American votes for granted when he said African Americans "ain't black" if they even considered voting for Mr. Trump.

What are the funeral plans?

A service is being held at the Fountain of Praise church, attended by some 500 guests including politicians and celebrities, CBS News reported.

The coffin will then be taken to a cemetery in Pearland, south of Houston. For the last mile of the procession, it will be conveyed in a horse-drawn carriage.

Barriers have been erected along the route to allow members of the public to pay their respects safely as the procession passes.

Mr. Floyd will be buried in a private ceremony in a grave beside that of his mother. His body was on display at the church for six hours on Monday.

Memorial services were also held in Minneapolis and North Carolina, where Mr. Floyd was born.