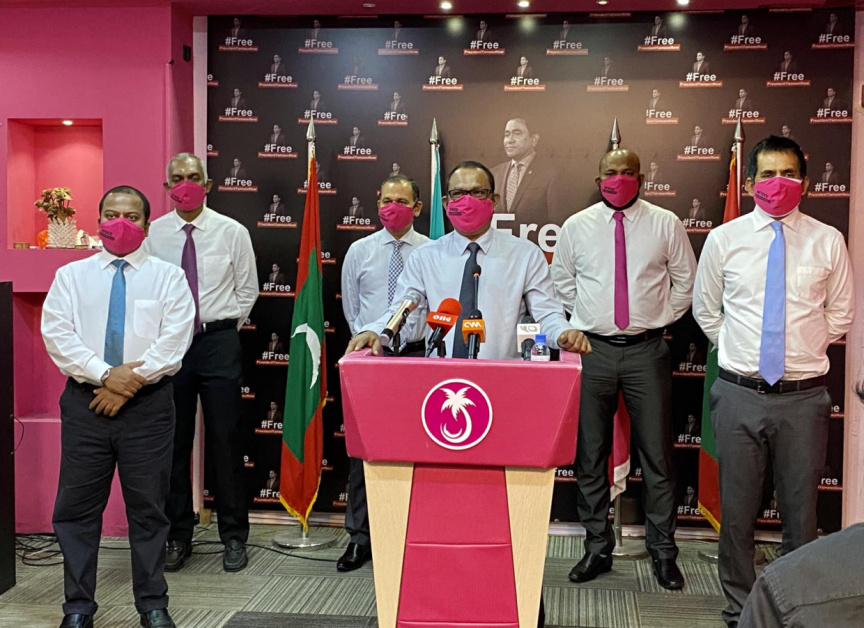 Opposition PPM/PNC has condemned rhetoric from governing MDP MPs against Police and stated that the opposition coalition would work to uphold the rights of police.

A bill to reform the police named as “Maldivian Police Service Bill” was today forwarded to the Committee on National Security of the Parliament. The bill was presented by the MP for West Henveiru Hassan Latheef. MDP won a supermajority in the parliament in the most recent elections.

MPs debating on the bill yesterday directed sharp criticism towards the police force.

A press conference by PPPM/PNC saw PNC leader Abdul Raheem Abdulla say that the coalition would always respect the police. He accused the parliament of trying to diminish the power of the police, which he condemned.

“Diminishing the power of security services, destroying their value, and embarrassing them in front of the public is the easiest way to destroy a country,” said Abdul Raheem.

He also expressed concern regarding the proposed changes to the oath of police. He said that the changes would see the upholding of human rights come before the respect and adherence to the religion of Islam. This was not something that should be done, said the former MP for Fonadhoo. He called to maintain the current oath for police officers.

Abdula Raheem even said that the Speaker of the Parliament Mohamed Nasheed had proposed to change the name of Shaheed Hussain Adam building. The building was named in honor of Martyr Hussain Adam who was killed by foreign mercenaries that tried to capture the Maldives on November 3, 1988, in a coup d’état.

Abdul Raheem said that he wished to keep the building’s name as it is for future generations to see the sacrifice of Hussain Adam. The Hussain Adam building is one of the most notable buildings in the capital and serves as the headquarters of the police, standing next to the Republic Square.

“They are worried about the Hussain Adam building named after Hussain Adam to hide their connection with November 3. That is our view. It shows how personal things are with the police force.” said Abdul Raheem.

PPM deputy leader and PPM/PNC coalition Parliamentary Group leader Adam Shareef Umar has also said that the way the police service bill was now, would give the Committee on National Security Services the power to control the police.

This was a way to narrow the powers of the executive and bring a parliamentary system without the say of the public, according to MP Umar.