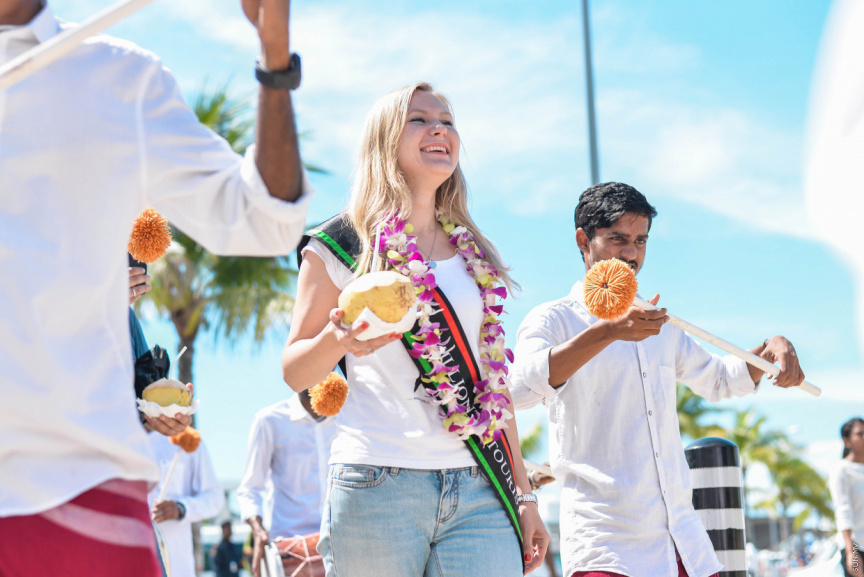 Russian tourist Marina Kazakova (C) - the 1.5 millionth tourist to arrive in Maldives in 2019 - is welcomed upon arrival at the Velana International Airport on November 24, 2019. (Sun Photo/Fayaz Moosa)

Finance Minister Ibrahim Ameer, on Tuesday, said that even if Maldives reopens its borders, the most optimistic projection is that the country will have 980,000 tourist arrivals this year – a major blow for a country which enjoyed a record-breaking 1.7 million tourist arrivals last year.

Ameer was summoned for a meeting of the Parliament’s Economic Affairs Committee on Tuesday afternoon.

Speaking at the meeting, Ameer noted that Maldives had enjoyed 1.7 million tourist arrivals last year, but warned Maldives is projected to finish this year with significantly lower tourist arrivals.

“Though Maldives welcomed 1.7 million tourists last year, our latest projection is we will see 980,000 tourist arrivals this year,” he said. “And that too, is a very ambitious number.”

Ameer said that the Maldivian government does not project tourist arrivals to reach 1.7 million next year either.

He said that the government projected tourist arrivals next year to fall within the range of 1.1 million to 1.2 million tourists, even if Maldives were to reinforce marketing and the pandemic were contained.

Tourism is Maldives’ main economic driver, and the shutdown of the tourism industry due to the coronavirus pandemic is having a severe impact on the State’s revenue.

Maldives closed its borders on March 27, and up until that point, had recorded 382,762 tourist arrivals.

The Tourism Ministry has announced plans to reopen the country’s borders to tourists in July.

According to tourist arrival projections on different scenarios prepared by the Maldivian government, based on scenario three, the country can expect 845,546 tourist arrivals this year if a sufficient number of tourists stream in once the borders are reopened in July.

In this scenario, tourist arrivals will be 50 percent less than less year, and the bed nights will drop by 39 percent.

Tourism Ministry has announced that tourists will be issued on-arrival visa without any conditions, will not be charged any additional fees, and will not need to undergo mandatory quarantine when borders reopen.

Though the Tourism Ministry has announced it will reopen the country’s borders to tourists in July, the exact date has yet to be announced.

Charges against 8 officers for assaulting suspect