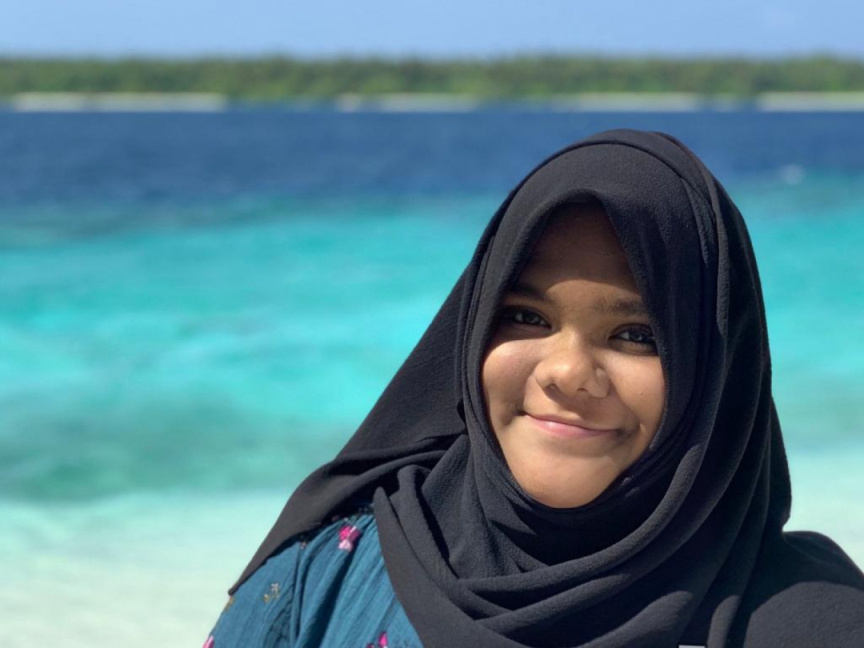 Fathimath Nafha Asim (Naff) developed an interest in science as a child. Like many of her classmates, she wanted to be a doctor when she grew up. Her mind changed shortly after the end of her school life, when she made a decision which plunged her into a whole different life.

Naff, with the end of her school life, began preparations to pursue further studies in medicine. She worked for nine months as a clinical assistant at Indira Gandhi Memorial Hospital (IGMH) to gain experience. She was applying to universities to study medicine when an announcement by the Maldives National University (MNU) grabbed her attention – a course in environment management which offered the opportunity to study subjects such as marine biology.

She abandoned her efforts to pursue her childhood ambition. She took the risk and applied for the course at MNU. Naff, who did not even know how to swim, leaped into unknown waters.

THE FRUITS OF HARD WORK

“I can count with my fingers the number of women who are in the field of environment or the marine field.  There are only a few women in leading professions in this field, a few dive instructors, people like Zoonatha [Zoona Naseem],” said Naff.

She approached her newfound ambition to pursue a career in the marine field with dedication and hard work. She began to familiarize herself with her new world.

“I began to develop a keen interest in other marine activities during the course. And I learned to swim. I taught myself during my frequent trips to the beach,” said Naff.

During her time at MNU, Naff pursued multiple internship opportunities. Her first internship was with Blue Marine Foundation, in a one-month project at G. Dh. Thinadhoo to draft guidelines on grouper fishing.

She then worked at the Maldives Marine Research Institute (then named Marine Research Center) as a volunteer intern for another one-month. She was involved in a coral reef monitoring program, data analysis, and administrative work.

She also worked as an intern at a marine lab run by Banyan Tree at Vabbinfaru, and worked on a project run by Six Senses Laamu’s Maldives Underwater Initiative in collaboration with Blue Marine Foundation for surveys to draft ocean protection guidelines.

Naff soon attracted the attention of Banyan Tree Maldives, and was offered a permanent position as the Corporate Social Responsibility (CSR) Coordinator for Vabbinfaru its sister-property, Angsana Ihuru.

One-and-a-half years on, Naff is busy with her involvement in her work at the marine lab, in addition to organizing CSR and awareness initiatives.

Her main role is to promote awareness among guests at the resorts and members of the general public regarding recycling, sustainable living, the environment, and marine life.

She also runs programs to advocate for gender equality, usually held in conjunction to national and international occasions.

“The programs are mostly focused on the occasion being celebrated. But we always focus on sustainability. We discuss environmental issues and communal issues unique to different communities, and reach solutions to such problems through them,” said Naff.

Naff, over the course of her work, has traveled to many Maldivian islands, meeting with school students, councilors and people from all walks of life.

She expects she runs awareness programs for around 3,000 people on an annual basis.

Her most fulfilling cleanup program was the coastal cleanup event she organized to celebrate International Coastal Cleanup Day last year.

“The event on International Coastal Cleanup Day in September 2019 was partaken by multiple organizations. The Girl Guides, the American Center, and a number of prominent organizations. And private organizations took part in the event collectively. It was a coastal cleanup of the entire Male’ City,” said Naff.

Organizing awareness programs and cleanup events isn’t all she does.

“We have specific targets to achieve every year. This includes monitoring recycling and conservation programs at the resorts itself. And third party advocacy programs are also run on a daily basis. And I’m also working with the team at the marine lab,” she said.

One of her keenest interests lies in empowering more Maldivian women to work in the marine field.

Being the only Maldivian woman at Vabbinfaru and Ihuru, she has her work cut out for her.

The ‘Seedlings’ program she runs at the resort in association with the Girl Guides is one of her proudest achievements.

Through the ‘Seedlings’ programs, young girls are taken to Banyan Tree’s resorts where they are taught to swim and taken on snorkeling excursions to view the vibrant coral reefs which surround the islands.

She cultivates a love for marine life, and the environment at large.

“I want to build a safe space for women in this field. Creating female advocates to promote environmental protection, marine protection and sustainability awareness is one of my biggest goals,” said Naff.

The perception that it is unsuitable for women to work at resorts has never been more wrong. And this is what Naff wants to prove. She wants to upend the draconian societal norms which prevent women from progressing.

She has plans of establishing a community-based organization which, in addition to empowering women to work in the marine field, will also ensure that the voice of the common people regarding sustainability and environmental protection reaches policymakers.

Naff considers her decision to abandon her childhood ambition of becoming a doctor and pursue a career in the marine field as one of the best decisions of her life.

“I am very happy to inspire so many. I will never regret that decision. Medicine is a noble field. I am very happy for my friends who went on to study medicine. What they are doing is also important,” she said.

3 rescued from boat in distress off the coast of Feeali

Cargo boat wrecks off the coast of Vaadhoo