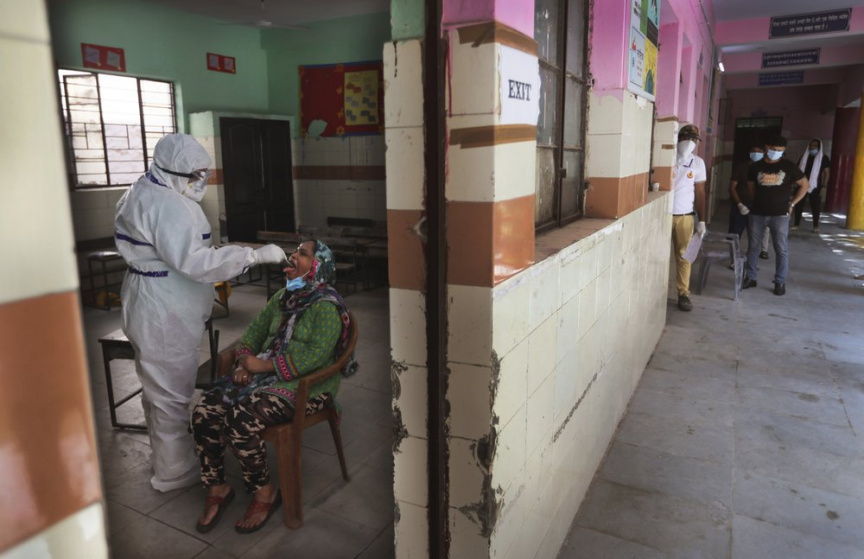 A health worker takes a swab sample of a woman for the COVID-19 rapid antigen test as other waits , in New Delhi, India, Wednesday, June 24, 2020. (AP Photo/Manish Swarup)

NEW DELHI (AP) — India says it will carry out a massive survey for the coronavirus targeting the entire population in New Delhi of 29 million.

Officials will go each household to record each resident’s health details, and administer a test for the virus to those who show or report symptoms.

The exercise will be completed by July 6, according to a plan issued by the government of New Delhi, the worst-hit city in the country with 70,390 confirmed cases.

Police will be deployed to enforce physical distancing and prevent the mixing of the population inside more than 200 containment zones in the capital, where large clusters of cases have been confirmed. CCTV or drone monitoring will also be used.

Police will have to ensure strict perimeter control and “absolute restriction of outward and inward movement of the population,” the city government said.

India on Thursday registered another record high of 16,922 cases, taking the total to 473,105. The Health Ministry also reported 418 more deaths, taking fatalities to 14,894. The ministry said the recovery rate was continuing to improve at 56%.

New Delhi’s government has projected that cases in the capital area alone could expand to more than half a million by late July, and is considering taking over luxury hotels and stadiums to convert into field hospitals.

Armed forces personnel are providing medical care and attention to coronavirus patients kept in railroad coaches that have been turned into medical wards at nine locations in the capital.

The Health Ministry said it has ramped up testing to more than 200,000 per day across the country, raising the total number of samples tested so far to nearly 7.3 million.

In other developments around the Asia-Pacific region:

— China reported 19 newly confirmed cases of the coronavirus on Thursday amid mass testing in Beijing, where a recent outbreak appears to have been brought under control. Of the new cases, 13 were reported in Beijing and one in the neighboring province of Hebei. Five others were brought by Chinese travelers from overseas. No new deaths were reported and 382 people remained in treatment for COVID-19, with another 110 in isolation. Case numbers both nationally and in Beijing were up by single digits from Wednesday but there was no sign of any further spread. This month’s outbreak in Beijing saw 249 people infected, most of them with links to the city’s biggest wholesale market, leading authorities to lock down some communities and cancel classes. Since then, 3 million test samples have been taken from 2.43 million people in the city.

— South Korea has reported 28 additional cases of the coronavirus, as the country is struggling to suppress a resurgence of the virus, mostly around the densely populated Seoul metropolitan area. The figures bring the country’s total to 12,563 cases with 282 deaths. Nearly 11,000 people have recovered while 1,307 are still quarantined. South Korea has seen an uptick in new infections since it eased strict social distancing rules. But the daily increases haven’t reached a level of hundreds of cases that were reported between late February and early March. Most of the recent cases have been associated with nightlife establishments, church gatherings, a huge e-commerce warehouse and door-to-door sellers.

— Australian health workers plan to go door-to-door to test more than 100,000 residents in a coronavirus hot spot in suburban Melbourne that is threatening to undo the nation’s success in battling the virus. Victoria state on Thursday reported 33 new cases, the highest daily number in more than two months. Premier Daniel Andrews said the testing aims to collect samples from half of all residents in 10 suburbs. He said the goal was to test 10,000 residents each day over 10 days. The tests are free and Andrews urged residents to agree to take them as a civic duty. More than 1,000 military personnel are deploying to Victoria to help with the operation, while other states will help process the test results. Australia has reported more than 7,500 confirmed cases of the virus, including 104 deaths.