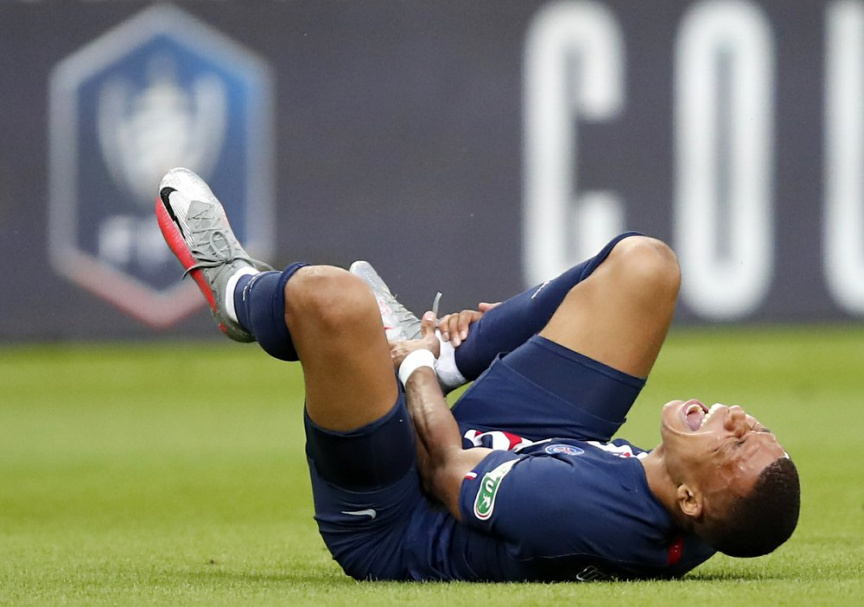 PARIS (AP) — A tearful Kylian Mbappé limped off with an apparent ankle injury as Paris Saint-Germain beat 10-man Saint-Étienne 1-0 to win the French Cup on Friday.

The injury to Mbappé, who returned to the sideline on crutches, took the gloss off a record-extending 13th cup success and raised concerns ahead of PSG’s Champions League quarterfinal against Atalanta next month.

Saint-Étienne center half Loïc Perrin was sent off in the 30th minute for clumsily hacking down Mbappé as he sprinted past, and Mbappé’s right ankle appeared to buckle under him.

“It just cracked a bit,” Mbappé told French President Emmanuel Macron after the final, as PSG players were about to collect their medals.

Perrin was making his last appearance for Saint-Étienne — 17 years after his debut — and his foul sparked a brief bout of angry shoving between the sides.

It was hard on Saint-Étienne, which hit the post through striker Denis Bouanga early on. Bouanga had a shot well saved by goalie Keylor Navas later in the first half.

But Moulin also had to make a superb one-handed save to keep out Ángel Di María’s curling strike.

Macron spoke at length with the players before kickoff. A maximum of 5,000 fans were allowed at Stade de France because of coronavirus restrictions, but only 2,805 actually attended.

PSG, which lost last season’s final on penalty kicks, had not played a competitive game since March 11 when it faced Borussia Dortmund in the second leg of the Champions League round of 16.

Saint-Étienne’s previous match was three days earlier in the French league, before it was canceled with 10 rounds remaining on April 30.

Despite having an extra player, PSG hardly threatened in the second half other than a couple of speculative shots well saved by Moulin.