Uncommon Cobia Fish, a surprise delicacy for guests at Paradise 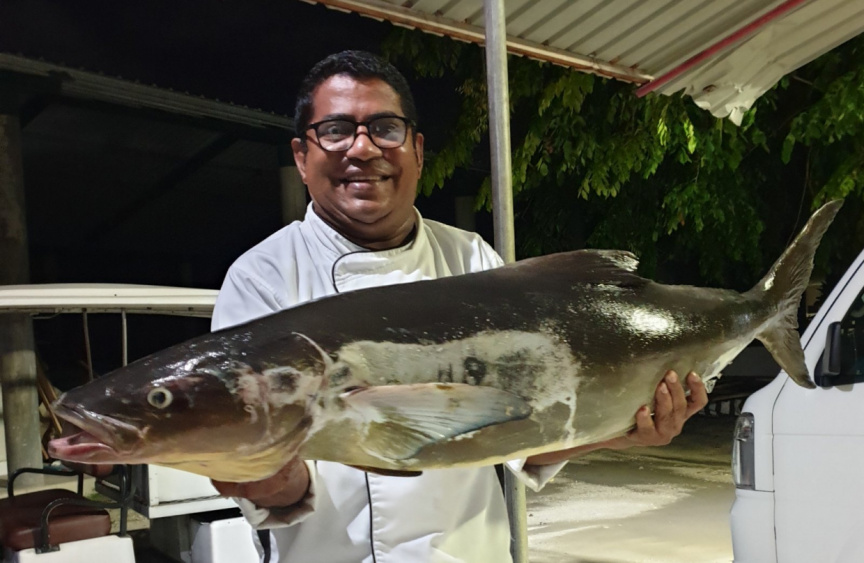 A Cobia Fish caught by staffers of Paradise Island Resort.

A type of fish not commonly caught in the Maldives, it is sometimes referred to as a Butter Fish or Cobia Fish. Maldivians usually call it 'Muranga Mas'. Scientifically it is denoted as Rachycentron canadum. Some other common names for the fish include black kingfish and black salmon.

Very common in the coastal Singh regions of Pakistan, it is a type of fish that perfect for a lot of fish with a high number of proteins.

Somewhat rare in the Maldives, some staffers of Paradise Island Resort who are fond fishing managed to catch one of these beauties. It was caught nearly 90 meters deeps since the fish is usually found in muddy waters.

Staffers from Paradise at first thought it was a shark and were surprised at the four feet length of the fish. It weighed around 16 kgs. Ishag Solih who works at Paradise as a Chef said that this could be the biggest Cobia Fish ever to be caught in the Maldives. He also noted that this was not a type of fish Maldivians usually eat.

The fish was a major hit with guests when Ishag prepared two fishes from it. He created a Baked Steak dish and a Sashimi Platter from the delicate fish.

"The guests loved it. Out of around 80 guests that took part in the meals today, maybe 75 had the steak dish. They said that it was very tasty. They likened it to a fish used in Japan for sashimi." said Ishag.

Guesthouses in Male’ region will not reopen in October