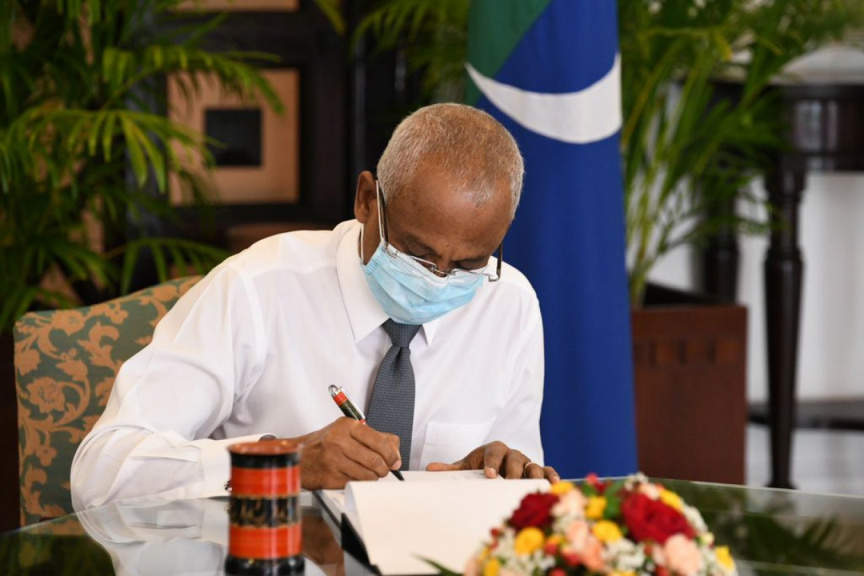 President Ibrahim Mohamed Solih has signed the register in remembrance of former parliamentarian and long-term public servant Hussain Mohamed who passed away on September 4, 2020.

Hussain Mohamed passed away at the Tree Top Hospital on September 3.

Tributes were also paid for the late ex-parliamentarian during the Parliament session today. Other than President Solih, Foreign Minister Abdulla Shahid also signed the register.

He was a three-term consecutive parliamentarian and represented the A.A Atoll constituency as well as the A.A. Mathiveri constituency. He had served in the 16, 17, and 18th parliaments.

The public will also be permitted to sign the register for Hussain during official hours until the end of the week, Deputy Speaker Eva Abdulla had announced. Eva requested parliamentarians who worked with Hussain to also sign the register in honor of the deceased ex-lawmaker.

A moment of silence was also observed for the late ex-lawmaker and Deputy Speaker Eva expressed condolences to the family of Hussain Mohamed on behalf of her and all parliamentarians.

Having served in the media and education sector, Hussain even worked as a journalist at Aafathis News before switching to Public Service Media and served in senior roles.

He specialized in international and sports. Hussain worked in the media industry for nearly two decades and even received the Diamond Pen of recognition in media by the Maldives Media Council.

Hussain also served as the Deputy Minister of the Education Ministry as well as a Director at the Ministry. He started his career in politics in 2005.

Pres: Maldives remains one of the safest destinations