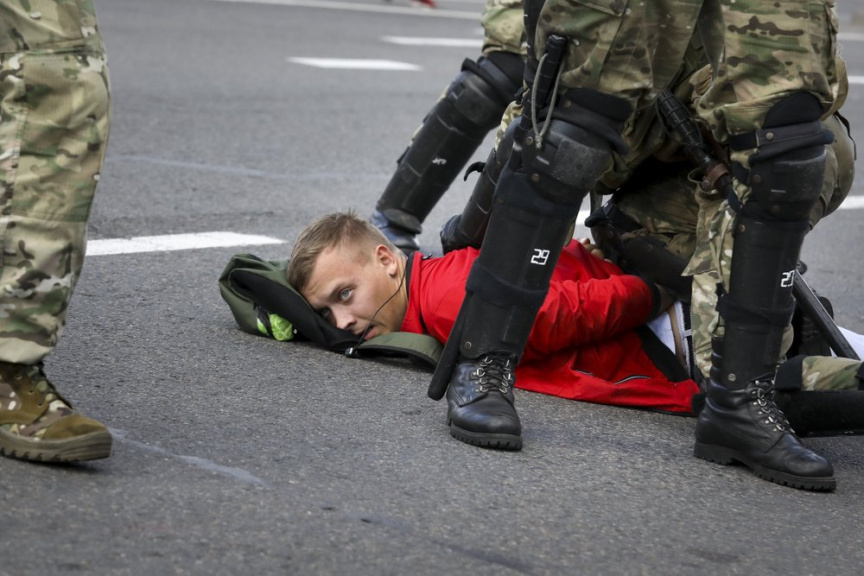 KYIV, Ukraine (AP) — More than 100,000 demonstrators calling for the authoritarian president of Belarus to resign marched through the capital of Minsk on Sunday as the daily protests that have gripped the nation entered their sixth week.

Many in the crowd, which the human rights group Viasna estimated as numbering more than 150,000, carried placards critical of Russia, reflecting concerns about President Alexander Lukashenko’s planned meeting on Monday with Russian President Vladimir Putin.

It would be their first face-to-face contact since the unrest broke out in Belarus after the Aug. 9 presidential election that officials say gave Lukashenko a sixth term with 80% support. Protesters and some poll workers say the results were rigged.

Putin has said he stands ready to send Russian police into Belarus if the protests turn violent, stoking fears that Moscow could use the political dissent as an excuse to annex its neighbor like it did in Crimea in 2014. The countries have a union agreement envisaging close political, economic and military ties, although Lukashenko has repeatedly expressed concerns that Putin wants Russia to absorb Belarus entirely.

Some observers believe Lukashenko is going into the meeting in a weak position, and that Putin may capitalize on this to try to ease him out of power.

“Lukashenko has not been able to show Putin that he is in control of the situation and has put out the flame of protest, and this may push the Kremlin to seek an alternative scenario and candidate,” independent political analyst Valery Karbalevich told The Associated Press.

Lukashenko has ruled the Eastern European nation of 9.5 million people with an iron fist since 1994, harshly repressing the opposition and the media. But the protesters’ determination appears strong this time, despite daily detentions and reports of police beatings and abuse.

The Interior Ministry said more than 400 people were detained Sunday in Minsk. The ministry also reported that demonstrations took place in 16 other cities, including Brest, where police used water cannon against a crowd of several thousand.

“The source of power in Belarus is the people, not Lukashenko and the Kremlin,” read placards carried by some marchers in Minsk. “Tell me who your friends are and I will say who you are,” read another that bore photos of Lukashenko and Putin.

Police on Sunday set up rows of barbed wire and prisoner transport vehicles and deployed thousands of servicemen to block off the city center from demonstrators, but protesters came together outside the center and marched toward the presidential residence on the city’s outskirts.

Lukashenko, a former collective farm director, has rejected any concessions or mediation attempts and has repeatedly accused Belarus’ western neighbors of working to overthrow his government. In one show of aggressive defiance, he was seen striding with an automatic rifle across the grounds of his presidential residence.

Belarus cracks down on journalists amid protests

Doctors in Madrid: ‘It’s like March in slow motion'