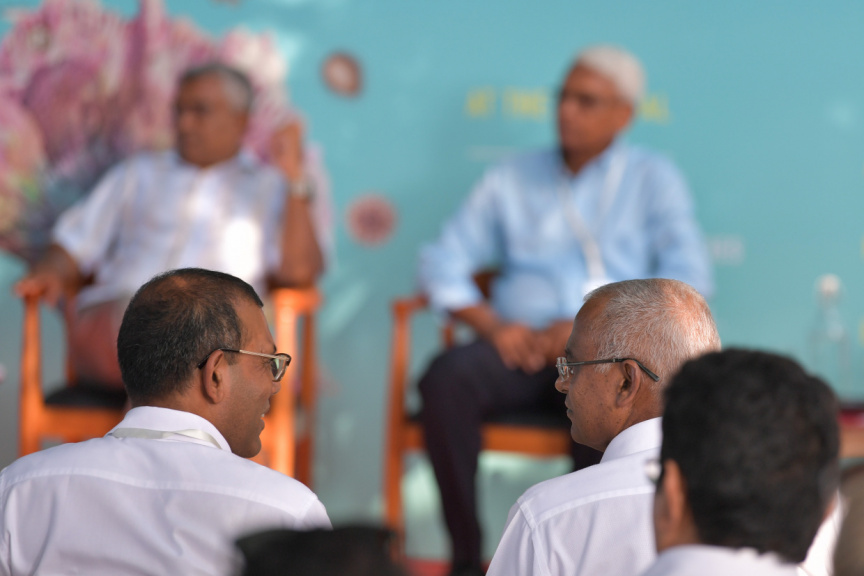 The Speaker of the Parliament and leader of the governing MDP Mohamed Nasheed has dismissed claims that he is after the presidency of the nation.

Writing an article for MDP's sixth newsletter, Nasheed said that he was not speaking about a cabinet member because he wished to become president and that he would never again be interested in becoming president.

Nasheed, who served as President of the Maldives from 2008 to 2013, said that he would speak about it later on if he wished to become the Prime Minister one day.

One of the fundamental aspects that MDP advocated for was, stopping corruption and abuse inside prisons. Nasheed said that since 2008, abuse in prisons of the nation had declined significantly, which was the result of the work by the party.

He noted that the 2008 Constitution included many aspects stop corruption. Nasheed said that it was difficult for him to say that corruption had been reduced and that new powers were required by MDP in order to do this.

Noting that the party had marked 15 years since forming and Nasheed said it would guarantee that the public were with them every time it came into power.

Pledging his full support for the current administration, Nasheed said that he did not want to see even a slight wan in the government right now.

Speaking about the senior position of the party, Nasheed said that the biggest authority or position granted to him by the party was to speak freely. He added that it was difficult to speak about a cabinet member, which President Solih was well aware of.

Nasheed has openly spoken out against Economic Minister Fayyaz Ismail, to whom the President has pledged support. Nasheed had even sparked a collection of signatures for a vote of no confidence against the Minister, which failed due to a lack of support.

"I am expressing disapproval against a Minister of the state, not because I have new ambitions of becoming President. I do not wish to become the President of the country anymore," said Nasheed.

He stated that he wished MDP to govern the country kindly and that it was a misconception for those who see his points as an attack to weaken the government.

Nasheed then stated another point he has been advocating for. A parliamentary system can permit MDP to serve the nation for the next ten years, said Nasheed who reiterated that it would be the most beneficial for the public.

"A second term for President Solih is also guaranteed through a parliamentary system," said Nasheed who then briefly wrote about the possibility of him becoming Prime Minister, "I will speak if I wish to become the Prime Minister. It is not like i have a few things to do. The number of issues even now is also many." said Nasheed.

'Only thing to show for a statement is my body, heart'

'Take a good look at what is happening to this country'

'MDP lost Male’ City in LCE because of govt. policies'

Nasheed alleges his attackers are linked to ISIS

'Poll victories were possible only with extremist vote'

'Difficult to support gov. if no support for hate bill'