Speaker: Parliament switched back to physical sittings to provide people with “lively debates” 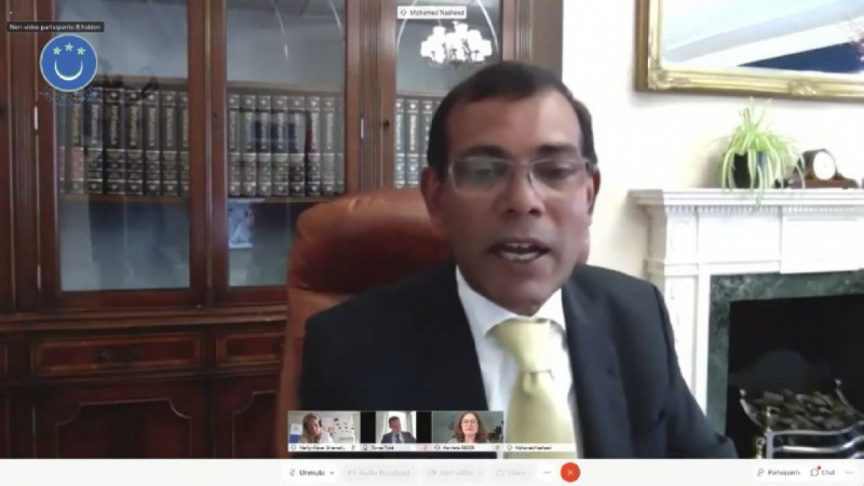 Parliament Speaker, former President Mohamed Nasheed said on Thursday that the Parliament, after holding virtual sittings due to the COVID-19 pandemic, switched back to physical sittings to provide the people with “lively debates” and keep them interested in the Parliament.

Taking part in the High-Level Session of the European Union Democracy Week on Thursday evening, Nasheed said it is important that the Parliament continues to function, whatever the situation may be.

Nasheed said that he was happy to note that the Maldivian Parliament had been the first to start virtual sittings.

“We took that risk of infection. But we still amended our house rules and we allowed the house to vote and to debate virtually. We are very pleased that we were able to do that,” he said.

Nasheed said that with the virtual sittings, the Parliament was able to save money for the government, while continuing to scrutinize government spending, including COVID-19 related spending.

He said that though the Parliament continued to function through virtual sittings, one and a half months into the lockdown, the Maldivian people, and the parliamentarians themselves, felt they needed to go back and have their debates in person.

“There is nothing like an in-person debate. The main function of a parliament is to debate, and by definition, a debate involves throwing hands, shouting at each other and the occasional shoe flying to the speaker,” said Nasheed.

Nasheed said that he accepted that it is crucial that digital democracy continues during times of pandemics and other difficult situations.

He said that it is easier in developed democracies, but challenging in emerging democracies.

“But we must realize, we must understand that it’s far easier in developed democracies. But in emerging democracies, where there are always forces trying to suppress democracy, it is very volatile to only rely upon virtual meets,” he said.

“Yes, but the pandemic has given us an insight, an idea on how we may be able to proceed with governance while there are difficulties. But at the same time, we have also understood, look man; this is how you do it. You have to sit around and you have to shout at each other. I can’t think of our Parliament not being able to sit physically and actually get its job done. We have very lively members forming different ideas, from different colors, and they bring a whole set of views to the Parliament, a whole rainbow of views to the Parliament that it has to continue sitting.”

Nasheed: China bank will not come here to seize assets

Speaker Nasheed says his work at JSC is sincere