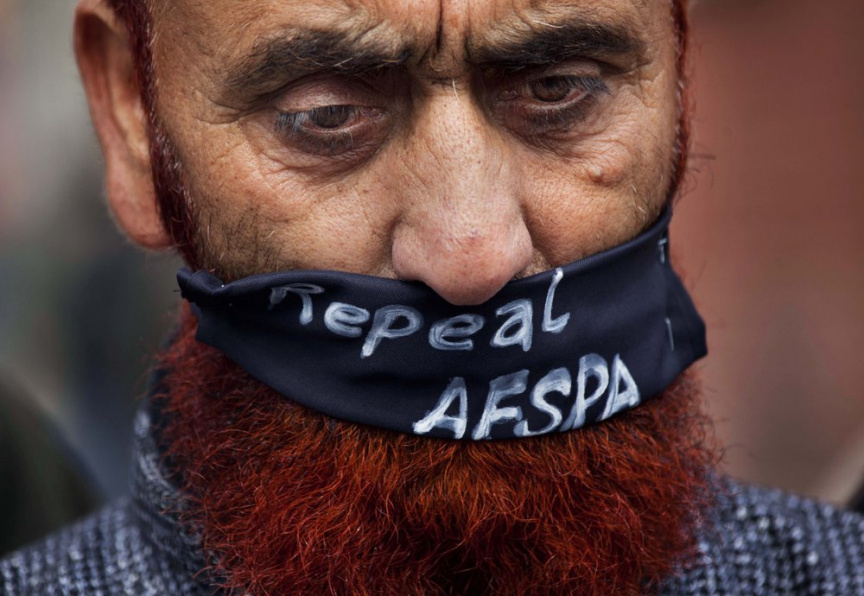 In this Saturday, Feb. 15, 2014, file photo, a relative of a missing Kashmiri wears a scarf asking for the Armed Forces Special Powers Act (AFSPA) to be repealed as he participates in a silent protest organized by Association of Parents of Disappeared People (APDP), in Srinagar, India. (AP Photo/Dar Yasin, File)

SRINAGAR, India (AP) — In a rare admission of wrongdoing, the Indian military on Friday said its soldiers in Kashmir exceeded their legal powers in the killings of three local men it had described as Pakistani terrorists.

Col. Rajesh Kalia, an Indian army spokesman, said police are investigating whether the men were actually involved in militancy. He said the victims have now been identified as residents of Rajouri district whose families had filed a complaint accusing soldiers of killing them in a staged gunbattle.

On July 18, the Indian army said its soldiers killed three “unidentified Pakistani terrorists” in the southern Shopian area. About a month later, three Kashmiri families in Rajouri identified the victims as their missing relatives using photographs of the bodies that circulated on social media, and filed a complaint with police.

Police ordered an investigation, and the results have not yet been released.

“Their DNA report is awaited. Their involvement with terrorism or related activities is under investigation by the police,” Kalia said in a statement, without explaining how the military had identified the three men.

Kalia said an army investigation showed the soldiers had exceeded the powers granted to them under the Armed Forces Special Powers Act.

The act gives the Indian military in Kashmir sweeping powers to search, seize and even shoot suspects on sight without fear of prosecution. Under the act, local authorities need federal approval to prosecute erring army or paramilitary soldiers in civilian courts. The special powers were given to the military in 1990, a year after an armed rebellion erupted in Kashmir seeking the Himalayan region’s independence or merger with neighboring Pakistan, which also controls part of Kashmir.

“Consequently, the competent disciplinary authority has directed to initiate disciplinary proceedings under the Army Act against those found prima facie answerable,” Kalia said. “Indian Army is committed to ethical conduct of operations.”

Police, which usually participate in counterinsurgency operations, said the July 18 encounter was a solo operation by the army. The police later buried the bodies in a remote cemetery.

The families of the young men — cousins aged 18, 21 and 25 — said they went to Shopian to work as laborers and were last heard from on July 17.

India has long relied on military force to retain control over the portion of Kashmir it administers and has fought two wars over the territory with Pakistan, which also claims the mountain region as its own.

The rebel uprising against Indian control and subsequent Indian crackdown have killed tens of thousands of civilians, rebels and government forces.

Hundreds of thousands of Indian troops are stationed in the region and maintain checkpoints throughout Indian-controlled territory.

The results of the police probe are likely to spark an outcry among Kashmiri activists who for years have accused Indian troops of abusing their powers and repeatedly targeting civilians.

In 2000, the Indian army killed five men it alleged were militants responsible for the massacre of 35 Sikhs in Kashmir. An investigation later found the five were local villagers killed in a faked firefight.

In 2010, a massive uprising erupted in Kashmir after a police investigation found Indian soldiers had killed three civilians in a staged gunbattle and then said the victims were militants in order to claim a reward for killing them. The army responded by suspending two officers.

India has rejected every request since 1989 to prosecute Indian soldiers in civilian courts in Kashmir for alleged rights abuses including murder and rape, according to official documents.