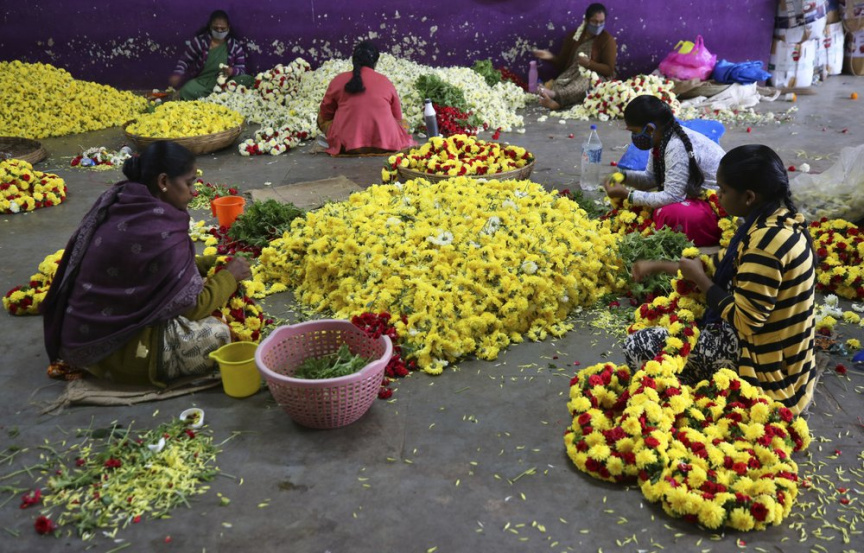 Flower vendors, some wearing face masks as a precaution against coronavirus, prepare garlands at a wholesale market in Bengaluru, India, Thursday, Sept. 24, 2020. The nation of 1.3 billion people is expected to become the pandemic's worst-hit country within weeks, surpassing the United States. (AP Photo/Aijaz Rahi)

NEW DELHI (AP) — India reported another 86,052 coronavirus cases in the past 24 hours, a declining trend with recoveries exceeding new cases this week.

The latest update from the Health Ministry on Friday raised the nation’s total to more than 5.8 million. The ministry said 1,141 more people died in the past 24 hours, for a total of 92,290.

India is expected to become the pandemic’s worst-hit country within weeks, surpassing the United States, where more than 6.9 million people have been infected.

The ministry said India’s recovery rate has crossed 81.55%. On Thursday, the number of people newly recovered, 87,374, exceeded the number newly infected. And the more than 562,000 new recoveries confirmed between Sept. 18 and Wednesday exceeded the 517,800 new cases over that time.

Less than 1 million people still have active infections while the number of people discharged from hospitals and quarantines exceeds 4.7 million, the ministry said.

India’s newly reported infections have remained below 90,000 for five straight days after hitting a record 97,894 on Sept. 16.

Though there was a 12% dip in testing for five days, it picked up again to 1.1 million on Thursday, the ministry said.

The total number of tests have crossed 67 million so far in the country with nearly 1.4 billion people. But a large number of them are antigen tests which are faster but less accurate compared to RT-PCR, the gold standard for the coronavirus. Antigen tests look for virus proteins while RT-PCR tests look for genetic material from the virus.