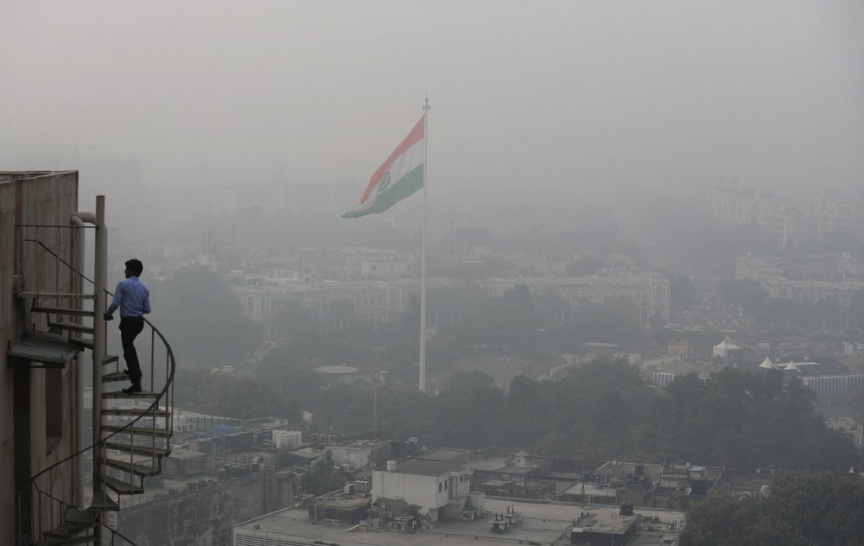 FILE - In this Nov. 1, 2019, file photo, an Indian walks up to the stairs as Delhi's sky line is seen enveloped in smog and dust in New Delhi, India. Authorities in New Delhi launched an anti-pollution campaign on Monday in an attempt to curb air pollution levels ahead of winter, when the capital is regularly covered in toxic haze, and warned that filthy air could make the coronavirus pandemic more dangerous. (AP Photo/Manish Swarup, File)

NEW DELHI (AP) — Authorities in New Delhi launched an anti-pollution campaign on Monday in an attempt to curb air pollution levels ahead of winter, when the capital is regularly covered in toxic haze, and warned that filthy air could make the coronavirus pandemic more dangerous.

The capital’s top elected leader, Arvind Kejriwal, said the government will start an anti-dust campaign, reduce smoke caused by agricultural burning and introduce a mobile application that will allow citizens to lodge photo-linked complaints against polluters.

“Polluted air can be life-threatening in view of the COVID-19 pandemic. Both affect the lungs,” Kejriwal said.

Health experts say high air pollution levels over a prolonged period have compromised the disease resistance of people living in New Delhi, one of the world’s most polluted cities, making them more susceptible to the coronavirus.

It is estimated that more than a million Indians die every year because of air pollution-related diseases.

Among the many Indian cities gasping for breath, New Delhi tops the list every year. Winters have become a time of health woes, when the city is covered with a toxic haze that obscures the sky and blocks sunlight. Pollution levels soar as farmers in neighboring agricultural regions set fire to clear their land after harvests and prepare for the next crop season.

Anumita Roychowdhury, executive director at the New Delhi-based group Centre for Science and Environment and an air pollution expert, said the causes of the capital’s poor air quality are well known, as are the actions needed to combat it.

But she said the steps needed to improve air quality aren’t being carried out at the right scale.

The national capital has often experimented with limiting the number of cars on the road, using large anti-smog guns and halting construction activity. But the steps have had little effect because neighboring state governments have failed to cooperate.

In November 2019, New Delhi was blanketed in a dark yellow haze for several days and air pollution hit record high levels, forcing schools to close and flights to be diverted.