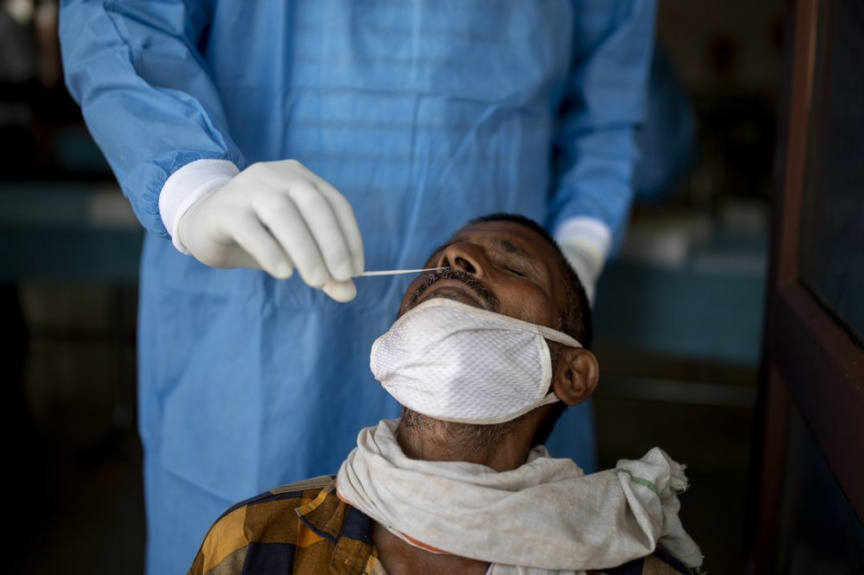 A health worker takes a nasal swab to test for COVID-19 in New Delhi, India, Thursday, Oct. 8, 2020. India is the world's second most coronavirus affected country after the United States. (AP Photo/Altaf Qadri)

NEW DELHI — India has reported another 70,496 new infections in the past 24 hours, taking the country’s total since the pandemic began to more than 6.9 million.

The Health Ministry on Friday also reported 964 deaths in the past 24 hours, taking total fatalities to 106,490.

India is seeing infections spread at a slower pace than last month when daily infections touched a record high of 97,894 cases. India is averaging more than 70,000 cases daily so far this month.

Since the pandemic began India has reported the second-most total cases in the world behind the United States.

Health experts have warned that congregations during major festivals later this month and in November have the potential for the virus to spread.

HERE’S WHAT ELSE IS HAPPENING:

The Indian Ocean island nation over the weekend reported its first locally transmitted infection in more than two months, which led to the discovery of a cluster centered around a garment factory in densely populated Western province.

By Friday the number of infections linked to the cluster climbed to 1,053, with more than 2,000 more people asked to quarantine at home. The majority of infected people are co-workers of the first patient, who is a worker at the garment factory.