Europe, US reel as virus infections surge at record pace 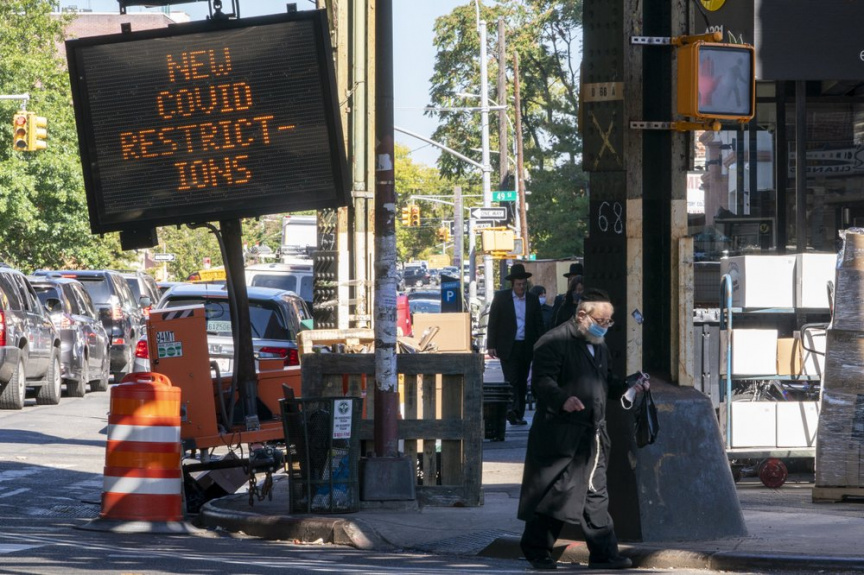 A traffic sign warns of new COVID-19 restrictions on New Utrecht Ave. in the Orthodox Jewish neighborhood of Borough Park in the Brooklyn borough of New York, Wednesday, Oct. 14, 2020. New York Gov. Andrew Cuomo threatened Wednesday to take away state funding from schools in coronavirus hot spots that are ignoring orders to shut their doors. The action came amid news reports on Jewish religious schools staying open in defiance of the rules in some parts of Brooklyn and Orange County. (AP Photo/Mary Altaffer)

Coronavirus cases around the world have climbed to all-time highs of more than 330,000 per day as the scourge comes storming back across Europe and spreads with renewed speed in the U.S., forcing many places to reimpose tough restrictions eased just months ago.

Well after Europe seemed to have largely tamed the virus that proved so lethal last spring, newly confirmed infections are reaching unprecedented levels in Germany, the Czech Republic, Italy and Poland. Most of the rest of the continent is seeing similar danger signs.

In the United States, new cases per day are on the rise in 44 states, with many of the biggest surges in the Midwest and Great Plains, where resistance to masks and other precautions has been running high and the virus has often been seen as just a big-city problem. Deaths per day are climbing in 30 states.

“I see this as one of the toughest times in the epidemic,” said Dr. Peter Hotez, an infectious-disease specialist at the Baylor College of Medicine in Texas. “The numbers are going up pretty rapidly. We’re going to see a pretty large epidemic across the Northern Hemisphere.”

“Everyone has this traditional, emotional, warm feeling about the holidays and bringing a group of people, friends and family, together in the house indoors,” he said on ABC’s “Good Morning America.” “We really have to be careful this time that each individual family evaluates the risk-benefit of doing that.”

Responses to the surge have varied in hard-hit states.

In North Dakota, Republican Gov. Doug Burgum raised the coronavirus risk level in 16 counties this week but issued no mandated restrictions. In Wisconsin, a judge temporarily blocked an order from Democratic Gov. Tony Evers that would limit the number of people in bars and restaurants.

South Dakota on Wednesday broke its record for COVID-19 hospitalizations and new cases and has had more deaths from the disease less than halfway through October than in any other full month. Despite the grim figures, GOP Gov. Kristi Noem has resisted pressure to step up the state’s response to the disease.

Wisconsin hit a new daily high for confirmed infections for the second time this week. In Missouri, the number of people hospitalized with COVID-19 reached nearly 1,450, another record.

“Early on in this pandemic, it was felt that this was a big-city problem, and now this is stretching out into the rural communities where I think there has not been as much emphasis on masking and distancing,” he said.

Worldwide, deaths have fallen slightly in recent weeks to about 5,200 a day, down from a peak of around 7,000 in April.

Dr. Hans Kluge, the head of the World Health Organization’s Europe office, urged governments to be “uncompromising” in controlling the virus. He said most of the spread is happening because people aren’t complying with the safety rules.

Europe’s financial markets fell sharply Thursday on concerns that the new restrictions will undercut the continent’s economic recovery. Stocks were down slightly on Wall Street.

In France, which reported over 22,000 new infections Wednesday, President Emmanuel Macron put 18 million residents in nine regions, including Paris, under a curfew starting Saturday. The country will deploy 12,000 police officers to enforce it.

Italy set a one-day record for infections and recorded the highest daily death toll of this second wave, adding 83 victims to bring its count to nearly 36,400, the second-highest in Europe after Britain.

In Britain, London and seven other areas face restrictions that will mean more than 11 million people will be barred from meeting with anyone indoors from outside their households and will be asked to minimize travel starting this weekend.

European nations have seen nearly 230,000 confirmed deaths from the virus, while the U.S. has recorded over 217,000, though experts agree the official figures understate the true toll.

So far in the new surges, deaths have not increased at the same pace as infections.

For one thing, it can take time for people to get sick and die of the virus. Also, many of the new cases involve young people, who are less likely than older ones to get seriously ill. Patients are benefiting from new drugs and other improvements in treating COVID-19. And nursing homes, which were ravaged by the virus last spring, have gotten better at controlling infections.

But experts fear it is only a matter of time before deaths start rising in step with infections.

“All of this does not bode well,” said Josh Michaud, associate director of global health policy with the Kaiser Family Foundation in Washington. “Rapid increases in cases like we’re seeing now are always followed by increases in hospitalizations and deaths, which is what is likely to occur across much of Europe and the U.S. in the coming weeks and months.”

Among the areas hit by the new surge is Gove County in Kansas, where the sheriff, the emergency management director, the CEO of the local hospital and more than 50 medical staff members have tested positive.

Dr. Doug Gruenbacher, a physician who contracted the virus in September, said people around Gove County are concerned about their personal liberty and “not wanting to be told what to do.”

“That’s part of the reason of why we love it here, because of that spirit and because of that independence,” he said. “But unfortunately, it’s something that also contributes to some of the difficulties that we’re having right now.”

Closure of govt. offices extended by another week

On #MeToo anniversary, leaders focus is on inequality