Armenians torch their homes on land ceded to Azerbaijan 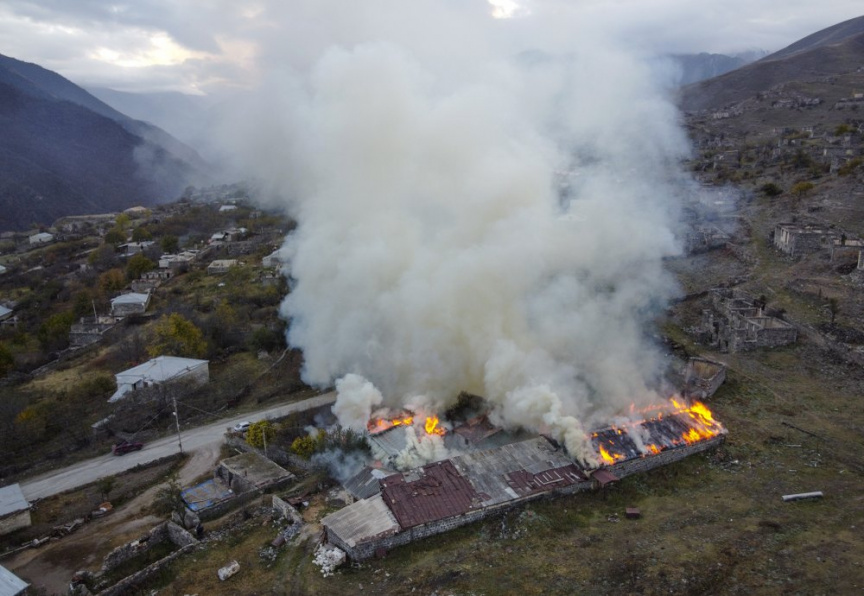 Smoke rises from a burning house in an area once occupied by Armenian forces but soon to be turned over to Azerbaijan, in Karvachar, the separatist region of Nagorno-Karabakh, on Nov. 13, 2020. (AP Photo/Dmitry Lovetsky)

KALBAJAR, Azerbaijan (AP) — In a bitter farewell to his home of 21 years, Garo Dadevusyan wrenched off its metal roof and prepared to set the stone house on fire. Thick smoke poured from houses that his neighbors had already torched before fleeing this ethnic Armenian village about to come under Azerbaijani control.

The village is to be turned over to Azerbaijan on Sunday as part of territorial concessions in an agreement to end six weeks of intense fighting with Armenian forces. The move gripped its 600 people with fear and anger so deep that they destroyed the homes they once loved.

The settlement — called Karvachar in Armenian — is legally part of Azerbaijan, but it has been under the control of ethnic Armenians since the 1994 end of a war over the Nagorno-Karabakh region. That war left not only Nagorno-Karabakh itself but substantial surrounding territory in Armenian hands.

After years in which sporadic clashes broke out between Azerbaijani and Armenian forces, full-scale fighting began in late September this year. Azerbaijan made relentless military advances, culminating in the seizure of the city of Shusha, a strategically key city and one of strong emotional significance as a longtime center of Azeri culture.

Two days after Azerbaijan announced it had taken Shusha, Armenia and Azerbaijan signed a Russia-brokered cease-fire under which territory that Armenia occupies outside the formal borders of Nagorno-Karabakh will be gradually ceded.

Muslim Azeris and Christian Armenians once lived together in these regions, however uneasily. Although the cease-fire ends the fighting, it aggravates ethnic animosity.

“In the end, we will blow it up or set it on fire, in order not to leave anything to Muslims,” Dadevusyan said of his house.

He spoke while taking a rest from salvaging what he could from the home, including metal roof panels, and piling it onto an old flatbed truck.

The truck’s final destination was unclear.

Dadevusyan’s dismay extended to Russian President Vladimir Putin. Armenia and Russia keep close relations and Russia has a sizeable military base in Armenia, so many Armenians had hoped for support from Moscow. Instead, Russia facilitated the cease-fire and territorial concessions and is sending in nearly 2,000 peacekeepers to enforce it.

“Why has Putin abandoned us?” Dadevusyan said.

Scores of local people flocked to Dadivank, an Armenian Apostolic Church monastery dating to the 9th century, as priests removed sacred items to be taken away. Many of the visitors took photos of themselves at the site nestled in the mountains near Karvachar, suggesting they did not expect to see it again.

A small group of Russian peacekeepers watched from across the road, some sitting on their armored vehicles.

The monastery’s abbot, the Rev. Hovhannes Ter-Hovhannisyan, walked over to greet them.

“It’s very important to us that the Russian peacekeepers came today in order to preserve peace, because not all the questions of our future have been resolved,” he said. “But I am sure that justice will triumph.”

Hundreds of thousands of Azeris were displaced by the war that ended in 1994. It is unclear when any civilians might try to settle in Karvachar — which will now be known by its Azeri name Kalbajar — or elsewhere.

Any returns could be wrenching. Settlers will confront the burned, empty shells of houses — or worse. Agdam, which is to be turned over next week, once was a city of about 40,000, but now is an empty sprawl of buildings that were destroyed in the first war or later ruined by pillagers grabbing building materials.

Returning also is potentially dangerous because of the remnants of war. The Azerbaijani general prosecutor’s office said one man was killed and another injured Saturday when they triggered a mine left over from the fighting in Fizuli, an area now under Azerbaijani control.

For the Dadevusyans, their sudden relocation is overwhelming beyond words.

“When you spent 21 years here and now need to leave it...,” Garo Dadevusyan said, trailing off, as smoke from nearby burning houses choked the air. Soon, he knew, his house would be one of them.