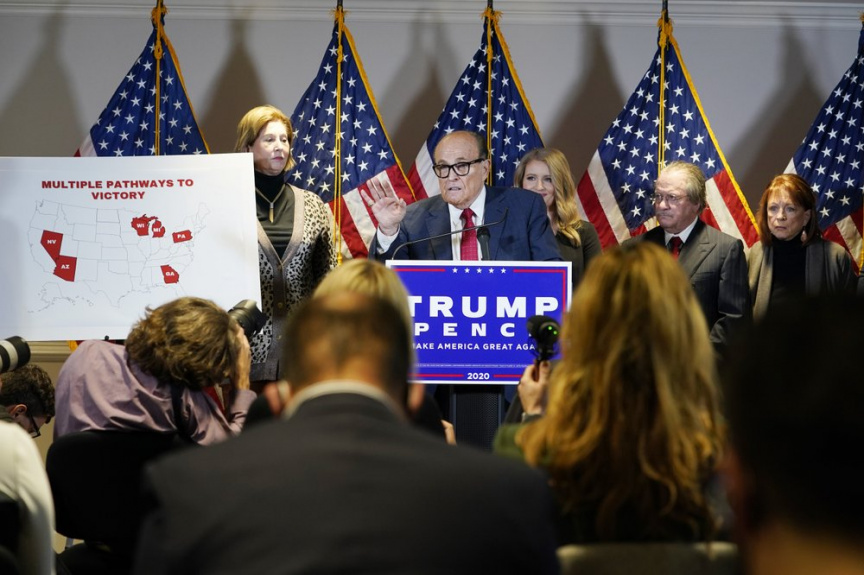 WASHINGTON (AP) — President Donald Trump and his allies are taking increasingly frantic steps to subvert the results of the 2020 election, including summoning state legislators to the White House as part of a longshot bid to overturn Joe Biden’s victory.

Among other last-ditch tactics: personally calling local election officials who are trying to rescind their certification votes in Michigan, suggesting in a legal challenge that Pennsylvania set aside the popular vote there and pressuring county officials in Arizona to delay certifying vote tallies.

Election law experts see it as the last, dying gasps of the Trump campaign and say Biden is certain to walk into the Oval Office come January. But there is great concern that Trump’s effort is doing real damage to public faith in the integrity of U.S. elections.

“It’s very concerning that some Republicans apparently can’t fathom the possibility that they legitimately lost this election,” said Joshua Douglas, a law professor at the University of Kentucky who researches and teaches election law.

“We depend on democratic norms, including that the losers graciously accept defeat,” he said. “That seems to be breaking down.”

Trump’s own election security agency has declared the 2020 presidential election to have been the most secure in history. Days after that statement was issued, Trump fired the agency’s leader.

The increasingly desperate and erratic moves have no reasonable chance of changing the outcome of the 2020 election, where Biden has now received more votes than any other presidential candidate in history and has clinched the 270 Electoral College votes needed to win.

But the president’s constant barrage of baseless claims, his work to personally sway local officials who certify votes and his allies’ refusal to admit he lost is likely to have a lasting negative impact on the country. Legions of his supporters don’t believe he lost.

“It’s about trying to set up the conditions where half of the country believes that there are only two possibilities, either they win or the election was stolen,” said Justin Levitt, a constitutional law scholar and professor at Loyola Law School. “And that’s not a democracy.”

The two GOP canvassers in Michigan’s Wayne County said in a statement late Wednesday they lacked confidence that the election was fair and impartial. “There has been a distinct lack of transparency throughout the process,” they said. But there has been no evidence of impropriety or fraud in Michigan, election officials have said.

Trump’s allies have homed in on the way that the president’s early lead in Michigan and some other states on Election Night slipped away as later votes came, casting it as evidence of something nefarious.

But a massive influx of mail-in ballots because of the coronavirus pandemic leaned largely to Biden, who encouraged his supporters to vote by mail, and those votes were the last to be counted. So it appeared Trump had an edge when he really didn’t.

In fact, Biden crushed Trump in Wayne County, a Democratic stronghold that includes Detroit, by a more than 2-1 margin on his way to winning Michigan by 154,000 votes, according to unofficial results.

Earlier this week, the county’s two Republicans canvassers blocked the certification of votes there. They later relented and the results were certified. But a person familiar with the matter said Trump reached out to the canvassers, Monica Palmer and William Hartmann, on Tuesday evening after the revised vote to express gratitude for their support. Then, on Wednesday, Palmer and Hartmann signed affidavits saying they believed the county vote “should not be certified.”

They cannot rescind their votes, according to the Michigan secretary of state. The four-member state canvassing board is expected to meet Monday and also is split with two Democrats and two Republicans.

Trump appears intent on pushing the issue. He has invited Michigan’s Republican legislative leaders, Senate Majority Mike Shirkey and House Speaker Lee Chatfield, to the White House, according to two officials familiar with the matter who were not authorized to speak publicly. The two have agreed to go, according to one official, but they haven’t commented publicly, and it’s not clear what the purpose of the meeting is.

The Michigan Legislature would be called on to select electors if Trump succeeded in convincing the state’s board of canvassers not to certify Biden’s 154,000-vote victory in the state. But both legislative leaders have indicated they will not try to overturn Biden’s win.

“Michigan law does not include a provision for the Legislature to directly select electors or to award electors to anyone other than the person who received the most votes,” Shirkey’s spokeswoman said last week.

During a press conference in Wilmington, Delaware, on Thursday, Biden said Americans are “witnessing incredible irresponsibility, incredibly damaging messages are being sent to the rest of the world about how democracy functions.”

A few hours earlier, Trump personal attorney Rudy Giuliani and others had held a press conference to allege a widespread Democratic election conspiracy involving multiple states and suspect voting machines. But election officials across the country have said repeatedly there was no widespread fraud.

Many of the allegations of fraud stem from poll watchers who filed affidavits included with lawsuits in battleground states aimed at delaying vote certification. Those affidavits lean into innuendo and unsupported suggestions of fraud.

For example, they refer to suitcases in a polling place, but make no suggestion that ballots were being secretly counted. There are allegations of ballots being duplicated — something routinely done when a ballot is physically damaged. There are claims that partisan poll watchers were too far away to observe well and therefore something fishy was probably going on. But they don’t have proof. Poll watchers have no auditing role in elections; they are volunteer observers.

Giuliani cited a few sworn affidavits that he said showed a vast Democratic conspiracy, but added that he could not reveal much of the evidence. One he cited was from Jessy Jacob, identified as a city employee in Detroit who said she saw other workers coaching voters to cast ballots for Biden and the Democrats.

A judge who refused to block certification of Detroit-area results noted that Jacob’s claims included no “date, location, frequency or names of employees” and that she only came forward after unofficial results indicated Biden had won Michigan.

Trump legal adviser Jenna Ellis, who joined Giuliani, said more evidence would be forthcoming and that Trump’s allies would have more success in courts going forward. But so far, most of their legal actions have been dismissed.

Chris Krebs, the Trump administration election official fired last week over the comments about the security of 2020, tweeted: “That press conference was the most dangerous 1hr 45 minutes of television in American history. And possibly the craziest.”

In Pennsylvania, where the Trump campaign is challenging the election results in federal court, a legal team led by Giuliani suggested in a filing Wednesday that the judge order the Republican-led state legislature to pick delegates to the Electoral College, potentially throwing the state’s 20 electoral votes to Trump. A judge canceled an evidentiary hearing in the case.

Judge John Hannah ruled without explanation, except to bar the party from refiling the case. The judge promised a full explanation in the future.

Biden won Arizona by more than 10,000 votes, and Maricopa County put him over the top. The county performed a hand count of some ballots the weekend after the election, which showed its machine counts were 100% accurate. The same was found Wednesday during routine post-election accuracy tests.

In Georgia, where officials have been auditing the results of the presidential race, Trump has repeatedly attacked the process and called it “a joke.”

He has also made repeated incorrect assertions that Georgia election officials are unable to verify signatures on absentee ballot envelopes. In fact, Georgia requires that they be checked.

The Associated Press called Biden the winner of Georgia and its 16 electoral votes on Thursday night.

A top Georgia election official said earlier Thursday that a hand tally of ballots cast in the presidential race had been completed, and that the results affirmed Biden’s narrow lead over Trump. The secretary of state’s office planned to release results of the audit later Thursday.

During the hand tally, several counties found previously uncounted ballots that the secretary of state’s office has said would reduce Biden’s lead to just under 13,000 votes, with roughly 5 million total votes cast. Georgia law allows a candidate to request a recount within two business days of certification if the margin is less than 0.5 percentage points. That recount would be done using machines.

Half a million dead in US, confirming virus’s reach

Biden rolling out plan for $4b global vaccine effort