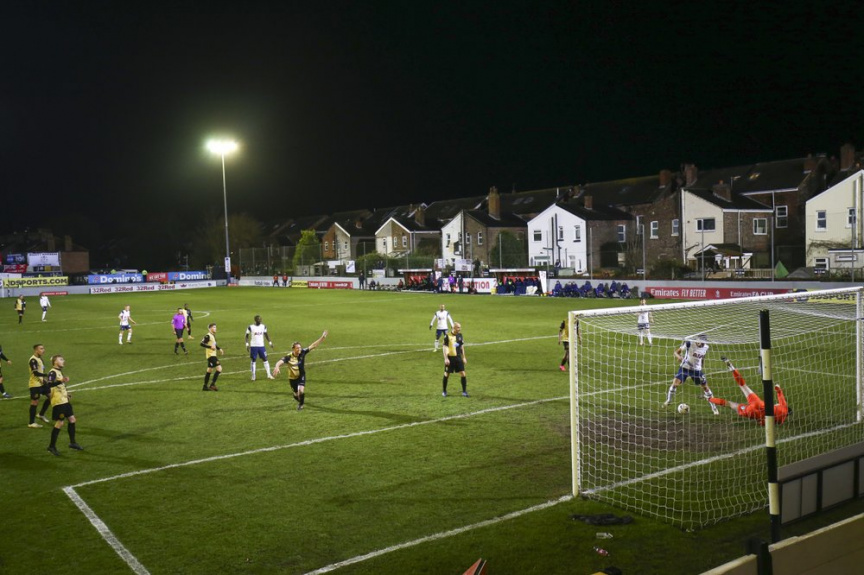 The biggest mismatch in the FA Cup’s 150-year history delivered a predictably one-sided result as Tottenham showed no mercy to an eighth-tier opponent whose lineup featured a garbage collector and a factory worker.

It was left, then, to Crawley to provide the so-called “giant killing” long associated with the storied competition, with a British reality TV star helping the fourth-tier team complete a stunning 3-0 win over Leeds.

On a classic day in the world’s oldest club knockout competition, Tottenham’s stars entered the humble surroundings of Rossett Park — a cosy ground located alongside a row of townhouses, from which horn-blaring residents got a free view of the action — and came away with a 5-0 victory over Marine, a team of part-timers 161 places lower in English soccer’s pyramid.

A first-half hat trick from Carlos Vinicius, who was filling in as striker for Harry Kane, settled any early nerves among Tottenham’s players who dressed for the game in a makeshift locker room that is usually a bar. For the locals watching the game from behind a wall or metal fencing — some with a glass of wine in their hands — there was the treat of internationals like Gareth Bale and Sergio Reguilon coming on as second-half substitutes.

“I’m not English but I know what this means for everyone,” Tottenham manager Jose Mourinho said, “so I brought a good team — not just for the result but also for the meaning of the cup.”

So, the dream is over for Marine, though a match broadcast live in 40 territories worldwide will be a huge money-spinner and potential life-changer for a tiny club from England’s northwest whose world has been turned upside down amid a pandemic that prevented any fans from attending the biggest game in its history.

For Crawley, however, the road to Wembley Stadium is still very much open, with the unlikely win over Leeds proving a fairy-tale moment for one of its late substitutes, in particular.

Summing up the “magic of the FA Cup” — a phrase often trotted out at the third-round stage of the competition when the country’s top teams enter — was the sight of Mark Wright coming on for Crawley in the final minutes for his debut in professional soccer.

The 33-year-old Wright has taken part in reality TV shows “The Only Way Is Essex,” “I’m A Celebrity…Get Me Out Of Here!” and “Strictly Come Dancing,” and also hosted TV shows in the United States. But he has continued to pursue his dream of becoming a soccer player, and joined Crawley last month on a non-contract basis in a move that has been documented in a BBC program.

For some, Wright’s late showing summed up a triumph of perseverance. For others, it simply capped a humiliating day for Leeds and its widely admired Argentine manager, Marcelo Bielsa, whose record in three seasons in the FA Cup reads: played three, lost three.

“He was very complimentary afterward,” Crawley manager John Yems said of Bielsa, “but I suppose when you lose 3-0, you can’t be anything but.”

Among the scorers for Crawley was Nick Tsaroulla, who was released by Tottenham after being involved in a car crash in 2017 that led to him being out of football for a year. After some time at Brentford, Tsaroulla is making his way in the game at Crawley and was in tears after the full-time whistle having scored his first senior goal.

There was no such fairy tale for fourth-tier Newport County, which scored an equalizer in the sixth minute of stoppage time against top-flight Brighton to take the game to extra time and a penalty shootout — with the final score at 1-1 — only to lose 4-3 on spot kicks.

Chelsea and Manchester City saw off lower-league opposition much more easily, albeit at home.

Timo Werner scored for the first time in 13 games to help Chelsea to a 4-0 win over fourth-tier Morecambe at Stamford Bridge.

Kai Havertz, another Germany international struggling for form, also netted along with Mason Mount and Callum Hudson-Odoi as Chelsea manager Frank Lampard’s decision to field a strong team got its reward.

Lampard, who has come under pressure after four losses in the past six matches in the Premier League, was particularly happy for Werner.

“He’s had a lot of near misses in that time,” Lampard said of Werner’s drought. “He’d been getting into positions to score goals but they hadn’t been going in for him. So I was pleased to play him today and for him to get confidence and get a goal.”

Sergio Aguero was expected to start for Man City for the first time since October but the striker had to miss the game against Birmingham because he was in isolation after coming into contact with someone who tested positive for COVID-19.

City coped just fine, a powerful lineup featuring Kevin De Bruyne easing to a 3-0 win thanks to two goals by Bernardo Silva and a third by Phil Foden. All the goals came in the first half.

City manager Pep Guardiola was unsure if Aguero would be available to play against Brighton in the league on Wednesday.

Man U compounds Liverpool’s woes with victory in FA Cup

Liverpool survives scare by Villa to win in FA Cup

JSC investigation into violation of right to counsel