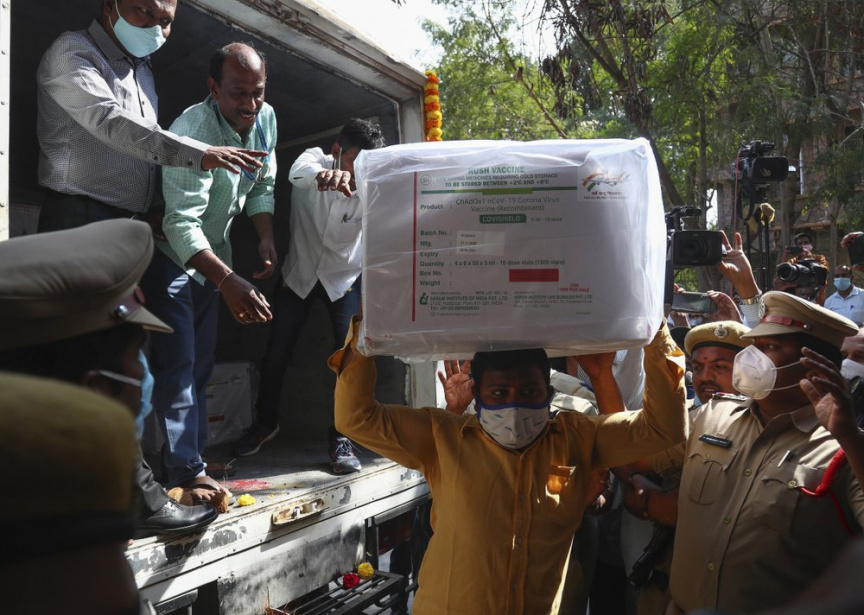 Health workers shift a box containing COVID-19 vaccine from a vehicle to a cold storage at Commissionerate of Health and Family Welfare in Hyderabad, India, Tuesday, Jan. 12, 2021. On Jan. 16 India will start the massive undertaking of inoculating an estimated 30 million doctors, nurses and other front line workers, before attention turns to around 270 million people who are either aged over 50 or have co-morbidities. (AP Photo/Mahesh Kumar A.)

Beginning Saturday, India will start the massive undertaking of inoculating an estimated 30 million doctors, nurses and other front-line workers. The effort will then turn to inoculating around 270 million people who are either older than 50 or have secondary health conditions that raise their risks of dying from COVID-19.

The first vaccine shipments contain the COVISHIELD vaccine made by the Serum Institute and developed by Oxford University and AstraZeneca.

India’s drug regulator has also approved for emergency use a homegrown vaccine, Bharat Biotech’s COVAXIN. Medical groups and others have raised concern about the drug being approved with scant evidence of its effectiveness. It’s still unclear when and where COVAXIN will be distributed.

India has the second-most COVID-19 infections in the world, after the U.S. It has confirmed more than 10.4 million cases and over 150,000 deaths.