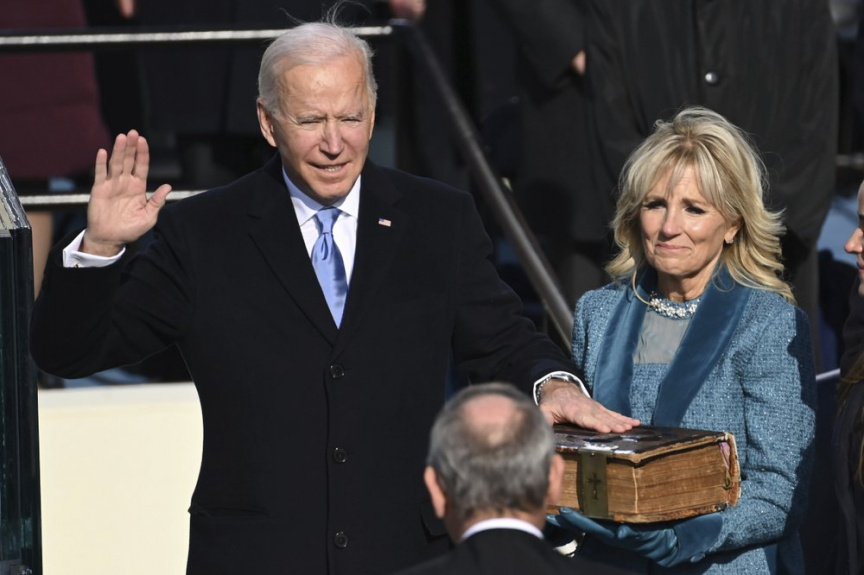 Joe Biden is sworn in as the 46th president of the United States by Chief Justice John Roberts as Jill Biden holds the Bible during the 59th Presidential Inauguration at the U.S. Capitol in Washington, Wednesday, Jan. 20, 2021.(Saul Loeb/Pool Photo via AP)

Biden took the oath of office just before noon Wednesday during a ceremony at the U.S. Capitol. The presidential oath was administered by U.S. Supreme Court Chief Justice John Roberts.

Biden was sworn in using a Bible that has been in his family since 1893 and was used during his swearing-in as vice president in 2009 and 2013. The 5-inch thick Bible, which could be seen on a table next to Biden’s chair on the dais, has a Celtic cross on its cover and was also used each time he was sworn- n as a U.S. senator.

Biden’s late son, Beau, also used the Bible for his own swearing-in ceremony as attorney general of Delaware and helped carry the Bible to his father’s 2013 ceremony.

HERE’S WHAT ELSE IS GOING ON:

Kamala Harris has been sworn in as the nation’s first female vice president.

The former U.S. senator from California is also the first Black person and the first person of South Asian descent elected to the vice presidency and becomes the highest-ranking woman ever to serve in government.

She was sworn in Wednesday by Justice Sonia Sotomayor, the first Latina to serve on the Supreme Court. Vice President Mike Pence, standing in for President Donald Trump, was sitting nearby as Lady Gaga sang the national anthem accompanied by the U.S. Marine Corps band.

''We can’t wait any longer to address climate crisis''