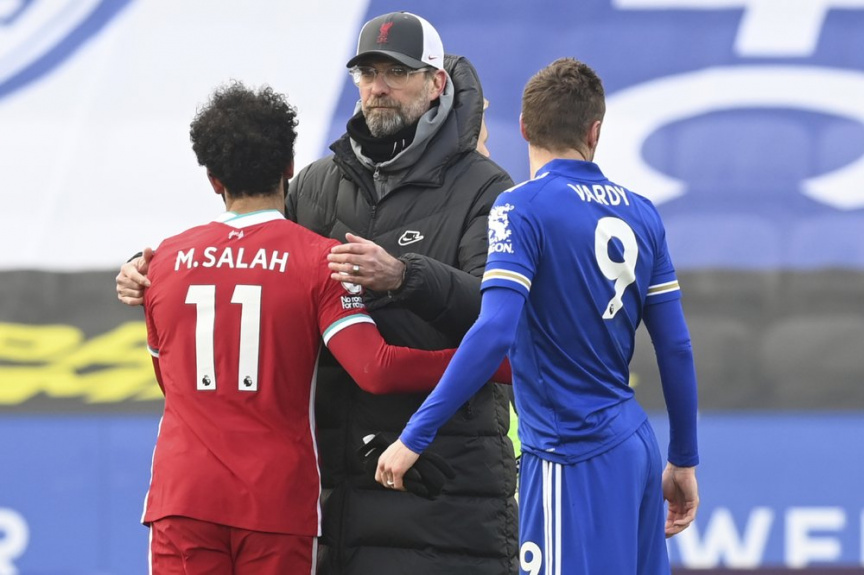 Jurgen Klopp composed himself, gave a little chuckle, and rubbed his nose.

The Liverpool manager had just seen his team collapse at Leicester to a 3-1 loss — a third straight defeat in its faltering defense of the English Premier League trophy — and Klopp was being asked if its title bid was over, even with three months left in the season.

“Yes,” Klopp eventually said. “I can’t believe it. But yes.”

Indeed, Liverpool’s meltdown has been bewildering over the last six weeks. Since a 7-0 thrashing of Crystal Palace just before Christmas, the champions have won just two of their 10 games in the league and are drowning in their defensive shortcomings.

They find themselves in fourth place and 13 points behind relentless leader Manchester City, which beat Tottenham 3-0 later Saturday for an 11th straight league win. City still has a game in hand over Liverpool and second-placed Leicester, which is seven points adrift.

“I don’t think we can close that gap this year, to be honest,” said Klopp, whose team might be out of the top four by the end of the round.

A ray of light for City’s rivals might be an injury sustained by its star player of recent weeks; Ilkay Gundogan hobbled off against Spurs clutching his right groin. Not, though, before he had scored twice — his second after running on to a long pass by goalkeeper Ederson Moraes — to extend the best goal-scoring run of his career.

“He won the (Premier League’s) player of the month last month,” Guardiola said, “and if he keeps playing this way he is going to win it again.”

That’s 11 goals in his last 12 league games for Gundogan, who also scored twice in a 4-1 win at Liverpool last weekend — after which Klopp basically acknowledged City likely couldn’t be stopped.

Burnley beat Crystal Palace 3-0 to move 11 points clear of the relegation zone alongside Brighton, which was held to 0-0 by Aston Villa, whose goalkeeper Emi Martinez virtually single-handedly kept the home side at bay with nine saves.

Liverpool went ahead through Mohamed Salah’s league-leading 17th goal but conceded three goals in seven minutes from the 78th, starting when James Maddison’s free kick from the left evaded many pairs of stretched-out legs and crept into the corner.

Klopp called that the turning point in the match. Another came three minutes later courtesy of another mistake by Liverpool goalkeeper Alisson Becker, who gifted City two goals last weekend with sloppy clearances.

This time, the Brazil international came out to clear a ball over the top but collided with debutant center back Ozan Kabak, who was back-tracking and hadn’t seen Alisson advance from his area. The loose ball arrived at the feet of Jamie Vardy, who walked it into the empty net.

Harvey Barnes capped Leicester’s fightback by getting in behind Liverpool’s wide-open defense.

After misses from the penalty spot by Kevin De Bruyne, Raheem Sterling and — last weekend — Gundogan, Rodri took over spot kick duties against Tottenham and converted for the first goal, although Hugo Lloris got a hand to the low shot.

Guardiola was not convinced by the effort, though, and hinted that goalkeeper Ederson Moraes, who set up Gundogan’s second goal with a raking long ball, may be the next to get a chance.

“If he is able to make this assist from 60, 70 yards, I think, ‘OK, from 12 yards it is easier,’” Guardiola said. “For the quality of the shot, Ederson is the best but penalties are completely different.

“I am so delighted for Rodri, for having the courage to take it, but the taking was not good. I have to reflect.”

After the penalty was awarded following a foul on Gundogan, Ederson wandered up to the halfway line and appeared to suggest he could take it. After talking to midfielder Bernardo Silva, Ederson backed down.

City has won 11 straight games in the league, and 16 in a row in all competitions — a record for an English top-flight team. The leader’s game in hand comes against Everton on Wednesday.