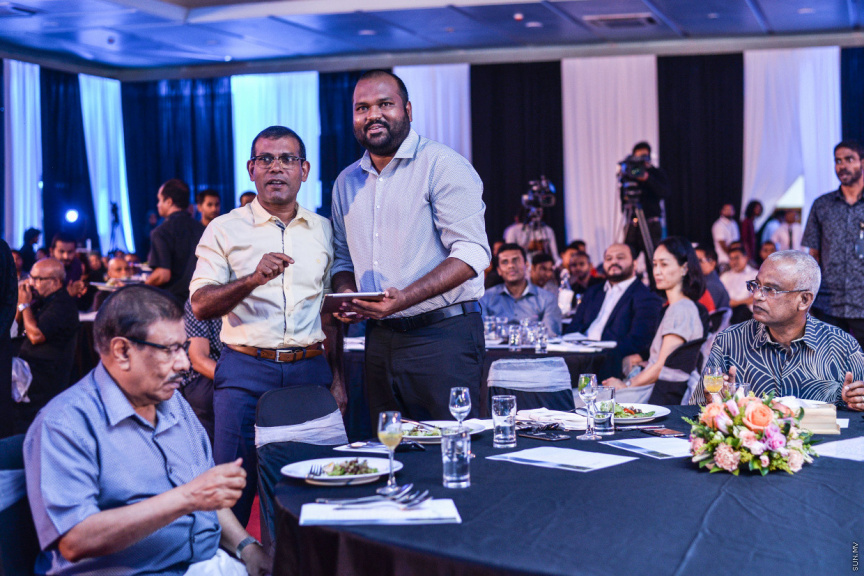 Speaker of the Parliament Mohamed Nasheed refused to specifically say the name of former Tourism Minister Ali Waheed in today’s sitting as he was announcing that four female parliamentarians had sent a letter to the parliament expressing concern over the departure of Waheed.

Ali Waheed departed from the Maldives last week after courts in the Maldives released his passport. He had been charged with a number of sexual crimes towards Tourism Ministry employees which had seen him get fired from the post.

Nasheed, in today's sitting, said, “The Judiciary Committee is being sent a letter by four female honorable parliamentarians who are unhappy with the departure of an individual accused of sexual harassment, and to inquire further information about the process.”

The letter by the female parliamentarians requested to inquire further information about the matter and read that the departure of the individual caused further distress to the victims. The letter requested to seek any changes that needed to be brought to the legal procedure and the measures to be taken for the enforcement of these changes.

Ali Waheed was fired from his post by President Ibrahim Mohamed Solih in July following the allegations. Nasheed, who is outspoken on most issues in the Maldives, had notably not spoken on the matter since the allegations first surfaced. He had only spoken on the issue in a Whatsapp group of MDP where he said that he was concerned over the serious charges against Ali Waheed.

Nasheed had not even condemned the departure of Ali Waheed, which had garnered a lot of criticism towards the government. The Prosecutor General’s Office of the Maldives has now appealed the decision to release the passport of Waheed. His travel documents were released after an Orthopedic doctor named Dr. Yoosuf Shaan testified in court that Waheed required spinal surgery.

The courts in the Maldives released his passport for four months. If he does not return within the time period, the State Minister of the Youth Ministry Assad Ali (Adubarey) is to face the legal consequences, since he was named as a willing guarantor to the bail release.

'I also wish to find these flats, if they are missing'

Anni to EC: Stop being petulant, hold LCE as scheduled

Huge portion of next 14 day income are loan repayments