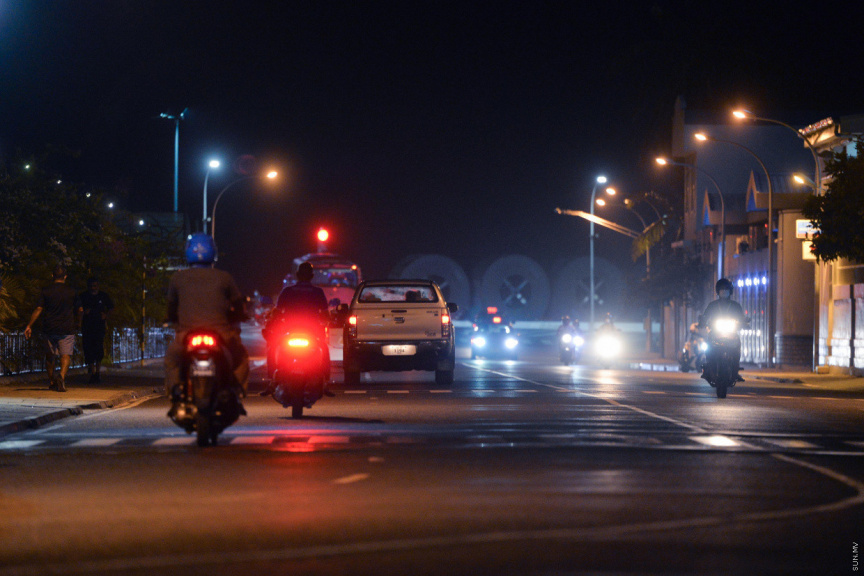 People wear masks as they drive along a road in Male' City on February 4, 2021. (Sun Photo/Fayaz Moosa)

Health authorities in the Maldives have extended the safety measures put in place in the capital Male' City and Addu City due to COVID-19.

In an announcement by the Director-General of Public Health, the safety measures in place in the capital were extended for 14 days. The measures include the curfew in the capital from 23:00 to 4:30. A ban on driving motorcycles is in place from 18:00 to 06:00. Gatherings of more than ten people are prohibited in the capital.

Universities and colleges are also to conduct sessions online and Pre-schools, nurseries, and daycare centers are to remain closed during this period.

Gyms are also to permit only solo sessions. This means that individuals carrying out solo exercises are to be permitted in gyms in accordance with the HPA guidelines. Government services are to be provided online starting from tomorrow.

Parks and public spaces are also to remain closed while those traveling for necessary purposes from Male’ City to other islands of the nation are required to present a negative PCR test of 72-hours.

Safety measures put in place in the southern city of Addu were also extended for a week. This includes limiting visits of residents from one household to another as well as the ban on dine-in services at restaurants. A ban on driving vehicles is also in place from 20:00 to 04:30.

A total of 62 cases have been confirmed from the city amidst a community spread. They include 20 from Hithadhoo, 13 from Feydhoo, 25 from Hulhumeedhoo, and four from Maradhoo-Feydhoo.

The neighboring city of Fuvahmulah is also under similar measures due to a possible community spread that has confirmed around 30 cases.

Case numbers have increased significantly in the nation since the turn of the year with over 2,000 cases confirmed in January alone. Currently, there are 2,328 active cases.

Restaurants ordered to close for dine-in at 8 pm

Man injured after getting trapped under turf roll dies