Parole Board admits to failure in performing duties before Parliament committee 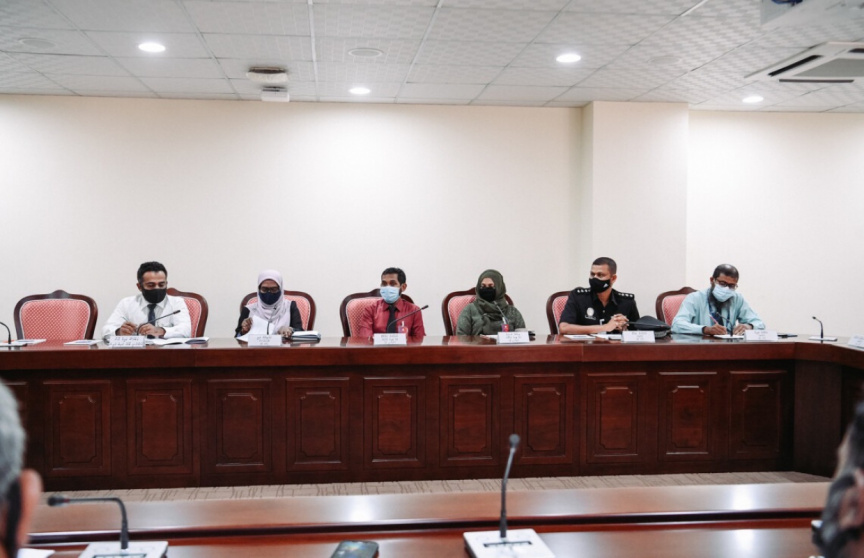 Members of Parole Board summoned by Parliament's Petition Committee in response to a petition filed by inmates on February 17, 2021. (Photo/People's Majlis)

The Parole Board told the Parliament Petition Committee that they are facing difficulties in holding meetings due to lack of quorum, hindering their ability to perform their duties.

The Petition Committee has launched an inquiry in response to a petition filed by inmates at Asseyri Prison. Committee members have visited the prison to question the inmates regarding their complaints, and summoned members of the Parole Board for questioning on Tuesday.

Parole Board’s chairperson Fauziyya Ali told the Petition Committee they are facing difficulties in looking into cases lodged with the Board – mainly the difficulty in holding meetings due to lack of quorum.

Fauziyya said that the Board held only 49 meetings last year, and had to cancel 15 meetings due to lack of quorum.

North Thinadhoo MP Abdul Mughni said that after a review of the complaints from inmates, the committee noticed multiple obstacles in access to the Parole Board.

Inmates are finding it hard to fill applications, renew their ID cards, gain access to court documents, and submit applications to the Board, he said.

Mughni also said that failure in holding meetings is also leading to eligible inmates being denied the relief they are due and having to spend more time in prison.

He asked the Parole Board for the reason for lack of quorum.

“That’s the main complaint in this petition. This reached us because of your failure to hold meetings as scheduled. The inmates submitted this complaint to the Parliament because they believe you are failing to perform your duties,” he said.

Fauziyya responded that all members of the Parole Board are busy with work in different institutions.

“We need five members for a quorum and to make decisions. But we can conduct interviews with just three members. If at least five members don’t attend [meetings], we can’t make a decision, even if we conduct interviews. As I mentioned earlier, the issue is that members are unable to attend meetings,” she said.

The Parole Board has nine members – representatives from different State institutions. The quorum for Parole Board meetings is five members.

The representative of the Attorney General’s Office at Parole Board, Maziya Abdul Sattar said that the work of the Parole Board is an additional responsibility for the members – an extension of their official duties.

Maziya said that all of the members of the Parole Board are senior officials in different State institutions.

“They are unable to attend Parole Board meetings after leaving their primary duties, or postponing a meeting or leaving something unattended. This is the main issue for lack of quorum,” she said.

Hoarafushi MP Ahmed Saleem expressed displeasure towards the performance of Parole Board members, and asked if they agreed the system isn’t working.

He also asked if the Parole Board has brought the issue to the attention of the Home Minister or President as it involves the denial of rights.

Saleem said that the cancellation of 15 meetings is no minor issue.

Upon WHO approval, opposition urges vaccinations