Emergency issue submitted over refusal to disclose agreements with India 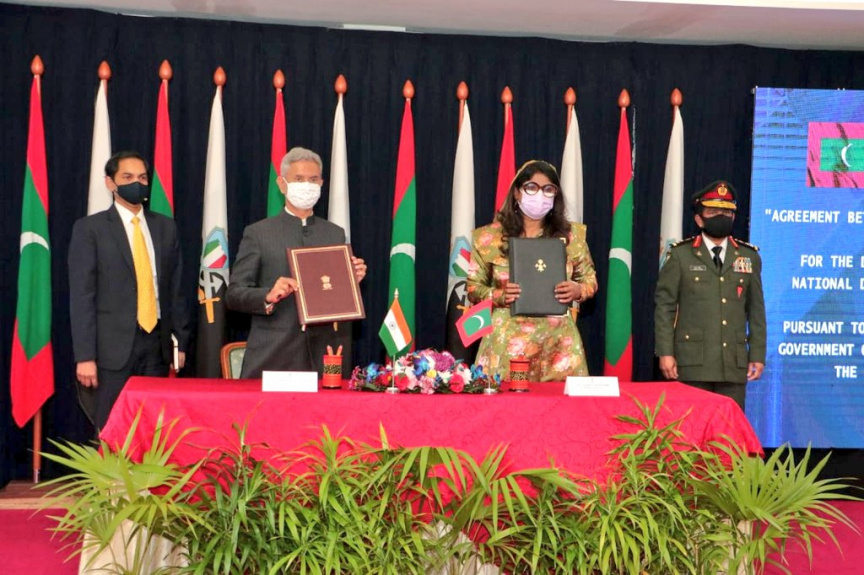 An emergency issue has been submitted to the parliament calling for the disclosure of agreements made by the state with India, including the recently signed agreement for the Uthuru Thilafalhu project, and loans obtained by the Maldives from India.

Naifaru MP Ahmed Shiyam submitted the motion stating that he had received information that the agreement for the dockyard and harbor development project in Uthuru Thilafalhu where the Maldivian Coastguard is based is for the actual purpose of basing Indian military personnel at the base. He said that this was a threat to the independence and sovereignty of the Maldives and that the agreement was signed with India without the approval of the parliament.

MP Shiyam also said that the project was first floated during the administration of President Abdulla Yameen and that discussions had been conducted with India for the project. He went on to say that the conditions and terms set out by India were not acceptable to the Maldivian government, which had rejected the agreement due to the reason.

Back then, the National Security Advisory Council had also stated that the terms set out by India for the project would infringe with national security interests, said MP Shiyam.

He alleged that the project to develop a dockyard and a harbor in the base was a ploy to secretly permit Indian military personnel to be based in the location. He said that the agreement included terminology to mislead the public such as rephrasing the designation of Indian military personnel to terms such as technicians and officials to allow them to be based at the location.

Speaking on the loans obtained by the government, MP Shiyam said that out of the USD 6.45 billion taken for such loans, the majority had been provided by India. He expressed concern on behalf of the public that the government was dependent on a single nation during a nervy time for the economy.

MP Shiyam was then interrupted by the MP for Central Henveiru Ai Azim, who is the Parliamentary Group leader for the governing MDP. MP Azim took a point of order to state that he did not believe the agreement with India required the approval of the parliament and that such matters were not to be discussed on the parliament floor.

“The emergency issue clearly states that the government is refusing to disclose the details. The High Court has issued a ruling that the information does not have to be disclosed. I believe that this is a reason as to why we should not be discussing this on the floor,” said MP Azim.

Maldives National Defense Force (MNDF) stated yesterday that no Indian military personnel would be based in the Uthuru Thilafalhu base. MNDF also specified that the agreement signed yesterday was for the development of a dockyard and a harbor. Indian technical professionals will also be assisting in the development of the infrastructure projects such as the construction of buildings in the location.

Under the agreement, a modern naval base is to be developed in the Uthuru Thilafalhu. The project will be conducted in two phases. The first three years will be for the development of the harbor and dockyard. Technical support is to be provided by India afterward if required.