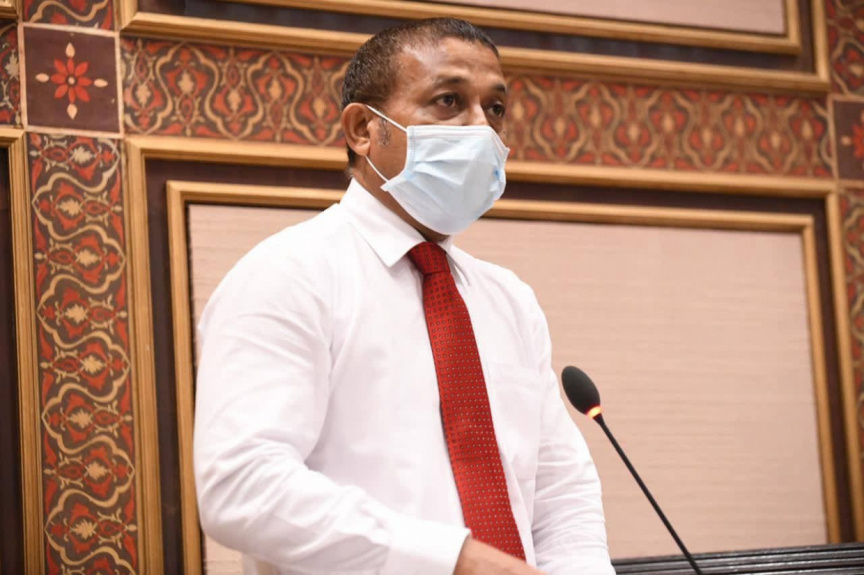 Minister of National Planning, Housing and Infrastructure Mohamed Aslam said on Wednesday that progress of developmental projects in islands will be clear by watching MDP’s ‘Rahvehi Fathis’ campaign conferences for the upcoming Local Council Elections.

Aslam was summoned to the Parliament on Wednesday morning in response to questions by Thimarafushi MP Abdulla Riyaz regarding dates for the start and completion of the planned coastal protection project in Th. Thimarafushi.

Using the opportunity to ask more questions, Addu Maradhoo MP Ibrahim Shareef asked Aslam for the dates for the start and fishing of the planned sanitation project in Addu City, as well as the India-funded land reclamation and road development projects.

Aslam said that work is already underway in the districts of Maradhoo and Maradhoo-Feydhoo to resurface the roads. He said that the contract for the Addu road development project has been signed, and that four companies have pre-qualified for the land reclamation project and that it is now in the tendering stage.

“I believe the status of projects in islands will become very clear at present if we watch Rahvehi Fathis. We recently answered all the questions asked by you, honorable Addu City representative. I’m sure you, honorable parliamentarian, must have watched it,” he said.

“The honorable minister has also pointed out the importance of you honorable parliamentarians carefully listening to the news. I too feel this way,” he said.

After Shareef, Central Hithadhoo MP Ahmed Rasheed asked about the area in Hithadhoo suffering from erosion, and the housing project.

Aslam responded that President Ibrahim Mohamed Solih had also spoken about the work on the area in Hithadhoo suffering from erosion on ‘Rahvehi Fathis’.

“I need to once again reference Rahvehi Fathis with regard to the area in Hithadhoo hit by erosion. The President has spoken about how to do it. That’s the plan. That is to find a solution to the issue of erosion when conducting the Addu land reclamation project,” he said.

Shareef raised a point of order following Aslam’s response, stating that the Constitution and Parliament’s regulations dictate questions asked at the Parliament must be answered, but the parliamentarians have not received answers to their questions.

Shareef said that Aslam cannot deflect questions by asking parliamentarians to watch ‘Rahvehi Fathis’. And that answers to questions asked by summoning a Cabinet minister to the Parliament shouldn’t be sought by watching ‘Rahvehi Fathis’.

Aslam responded that though he referenced Rahvehi Fathis, he has still answered the questions asked by the parliamentarians.

The Speaker interrupted Aslam at this point, stating that Shareef’s point of order has been rejected, and that Aslam only needs to respond to point of orders that are acknowledged.

'Hiyaa flats poorly planned, I wanted to demolish it'

Planning Minister: I have made inaccurate statements

'Housing projects will no longer be run based on age'