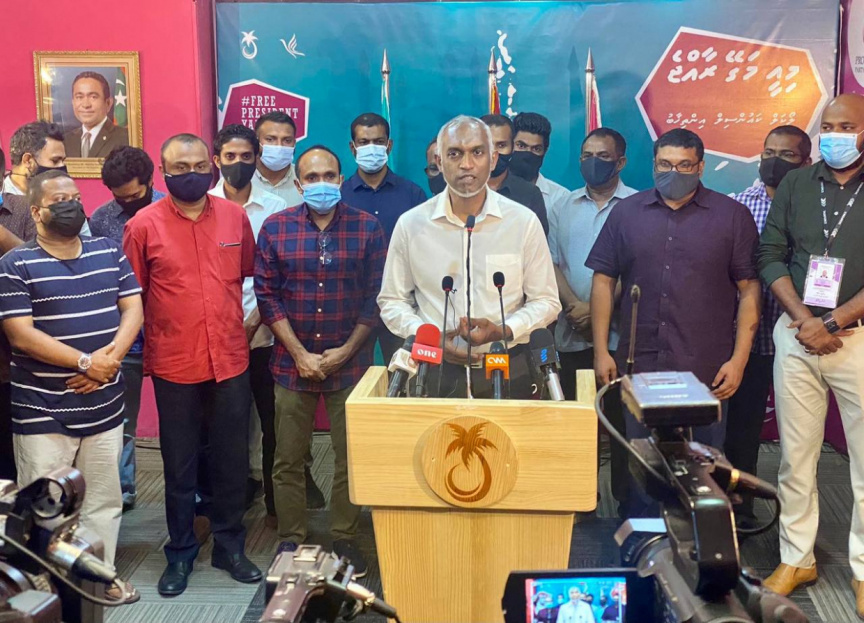 Mayor-elect of Male’ City, deputy leader of opposition PPM Dr. Mohamed Muizzu said on Saturday that he will work alongside the government and make Gulhifalhu the solution to the housing crisis facing residents of the populous capital.

Muizzu is braced to become the next Mayor of Male’ City after defeating ruling MDP candidate Anas Abdul Sattar in the Local Council Elections held last Saturday. The biggest pledge driving Muizzu’s campaign was the promise of solving the housing crisis.

In a press conference on Saturday night to celebrate Muizzu and other PPM candidates’ victory, Muizzu said he believes the votes he received from Male’ residents are votes to make Gulhifalhu their “housing destination”.

“I assure you, my first act as soon as I officially assume office, will be to talk with the government and make Gulhifalhu the housing destination which will provide Male’ residents with housing and provide a permanent solution to this. I will, In Sha Allah, get this done,” he said.

Muizzu said that he will work alongside the government.

Muizzu said that if the government is found to be working against the best interests of the people, he will raise concern on behalf of the people and work to change it.

Muizzu said he will work with candidates from PPM as well as other parties elected to Male’ City Council as a team, and produce positive outcomes.

“Male’ residents are living under difficult conditions. We need to work together to overcome this situation. Political differences must not become an obstacle to development of Male’," he said.

Preliminary results received by Sun show Muizzu in the lead in the race for Mayor of Male’ City with 61 percent of votes. His closest rival, Anas has conceded defeat and congratulated Muizzu.

PGO sends corruption case against Muizzu back to ACC

'Allegations of corruption cannot be proven at court'

Male’ Mayor: We have requested for budget to pay WAMCO