In Conversation with Richard Quest 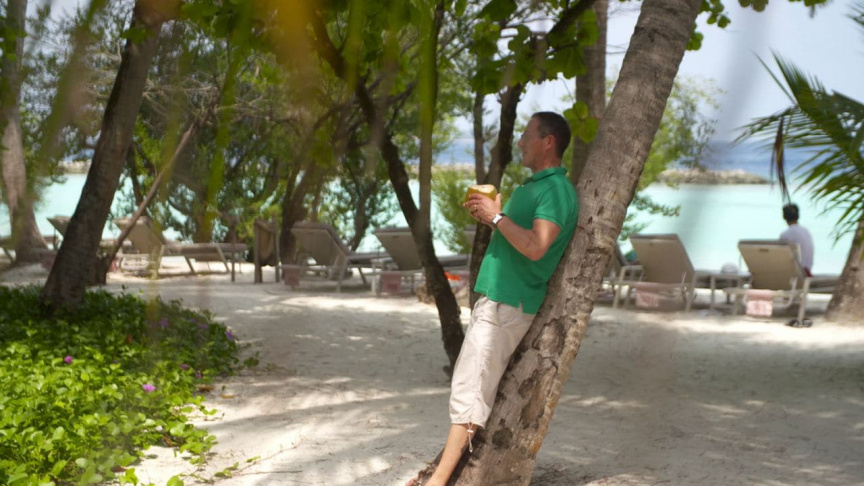 Mr. Richard Quest, one of the most well-known figures in the global media, sits down with Sun, speaking on a number of topics, from the success story of Maldivian tourism, to what it is missing and what needs to be done even more.

Mr. Quest was recently in the Maldives to shoot an episode of Quest’s World of Wonder, which will be airing this Saturday, 1030hrs Maldives time, on CNN.

Mr. Quest, when asked about his thoughts on how the Maldives handled the pandemic and its aftermath, said that the Maldives naturally gifted with its geography, which meant that outbreaks in local islands could often be clamped down, which even though led to some visitors missing out on the cultural and local island side of the nation, was absolutely the right policy for tourism. Comparing the Maldives with other tourism hotspot nations such as Seychelles, Mr. Quest said “They do not enjoy the advantage that the Maldives has of, loads of individual islands where one island is its own resort. Essentially every island is a bubble. An all you have to do is restrict the movements in terms of testing between the bubbles,”.

Even though he missed out on the rich culture of the Maldives during his visit, Mr. Quest was fully aware and understanding of the reasoning, but still expressed his full belief that the Maldives had a lot more to do, despite being a top tourist destination. One of the talking points regarding the missing pieces of the Maldives was the stark difference between the tourists visiting the nation.

“Here you have to have a balanced travel portfolio. You need the middle range. The backpackers maybe. The backpackers come, they stay at the guesthouses and rooming houses. I think you need a little more of the middle level. It’s very difficult to do when you have got resort islands. It’s very difficult to do, but, does the Maldives just want to be the destination for the very rich? I don’t think so,” said Mr. Quest.

Mr. Quest did not hold back when he stated that it was only the rich who can currently afford to visit the Maldives and that luxury resorts were doing even better than they were post-pandemic, while other types of travelers such as backpackers and budget travelers were missing out.

“But you have to say, who is going? Who is currently going to the Maldives? The reality is, because so many tourists are restricted at home, (for a) whole variety of reasons, only the really wealthy can afford to go there (the Maldives) at the moment. This is why if you look at the tourism profile, the 5-star resorts, luxury resorts are doing almost, and in some cases better than 2019. Because people are flooded there. Those who have got money, who want to escape lockdown who want workcations in a luxury environment have gone to the Maldives.” said Mr. Quest.

He suggested Maldives works, even more, to balance this gap, after highlighting that the government had not been idle on the issue.

The Maldives has often been hailed as one of the safest locations in the world when it came to the pandemic, and even Mr. Quest cited reasons for this earlier on in the interview. However, he advised being cautious and wary when making such a claim of calling a nation a “safe haven’.

“I think it is a very dangerous thing for any place to say we’re a safe haven. Dubai showed us the problems if you go down that road. It only takes one case to get out of control and suddenly—would you remember the cruise ship that built itself as covid-free, and suddenly there is an outbreak on board and the whole thing has to end in tears and embarrassment,” said Mr. Quest,” I think the Maldives is being very wise not to say that. What they’ve done is put in place the best policies and practice that have enabled the safety to be at least protected, if not guaranteed,”

Sun also asked Mr. Quest regarding the promotional activity of the nation’s tourism market and Mr. Quest, once again did not shy away from speaking his mind. He said that the Maldives had the sun, sand, and sea, so it is obvious what the nation would be selling, very much in the sense of making lemonade when you have lemons.

However, he was adamant in stating that there was a lot more to the nation than what meets the eye. He reflected on his own experience when he said that he had experienced the beauty and marvel of the country but had to leave without knowing or learning much about the nation as a whole.

“I could sit here and (talk) about how magnificent everything is. How the beautiful sun sets, the magnificent fishing on the boats we were...which we didn’t catch anything but I got the point. The snorkeling is wonderful. I saw more fish than I could shake a stick at, and there were beautiful and came up to me and almost shook my hand. I tried to climb a coconut tree and almost needed to be put into back traction afterward,”

He also posed questions regarding the land reclamation projects for resorts and whether the Maldives needed so many 5-star resorts before stating that despite being impressed by the environmental initiatives at resorts whether there was a correct balance in regards to the environment, demand for tourism, and development projects.

As the interview winded down, Mr. Quest also gave his insight on the economy and the recovery6 of industries such as tourism and aviation, where he predicted that luxury destinations and tourism could pick up, which he indicated that the Maldives was a testament to, as well as low-cost airlines which could see a quick recovery.

“Yes, the tourism industry will recover. Some will recover faster than others. Luxury destinations will do very well, which you’re seeing at the moment in the Maldives,” said Mr. Quest.