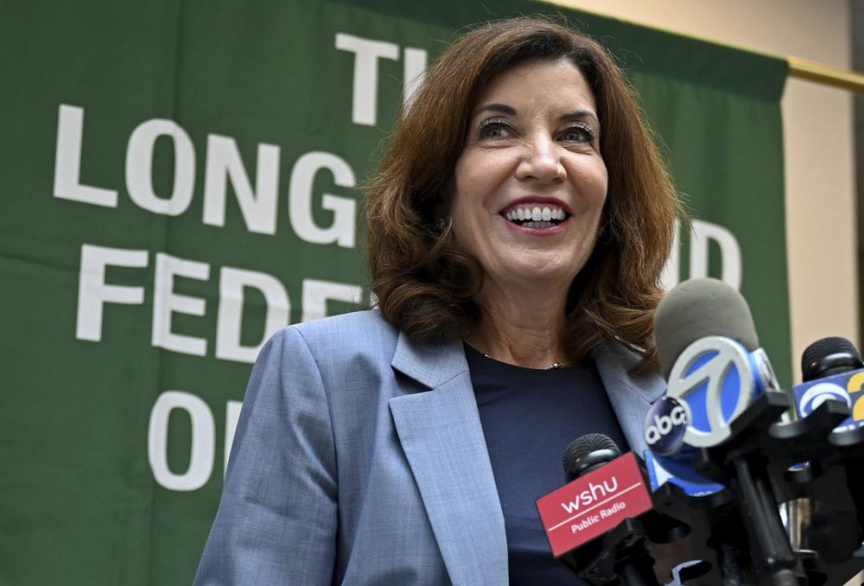 ALBANY, N.Y. (AP) — Kathy Hochul was set to become the first female governor of New York at the stroke of midnight, taking control of a state government desperate to get back to business after months of distractions over sexual harassment allegations against Andrew Cuomo.

The Democrat from western New York was to be sworn in as governor in the first minutes of Tuesday in a brief, private ceremony overseen by the state’s chief judge, Janet DiFiore.

Her ascent to the top job will be a history-making moment in a capital where women have only recently begun chipping away at what was long a male-dominated political culture.

Cuomo submitted a letter late Monday to the leaders of the state Assembly and Senate saying his resignation was effective at midnight. He announced he was quitting two weeks ago, saying he wanted to avoid a likely impeachment battle.

On his final day in office, Cuomo released a pre-recorded farewell address in which he defended his record over a decade as New York’s governor and portrayed himself as the victim of a “media frenzy.”

Hochul was scheduled to have a ceremonial swearing-in event Tuesday morning at the New York State Capitol. She planned to meet with legislative leaders later in the morning and make a public address at 3 p.m.

For the first time, a majority of the most powerful figures in New York state government will be women, including state Senate Majority Leader Andrea Stewart-Cousins, Attorney General Letitia James and the chief judge, DiFiore. The state Assembly is led by a man, Speaker Carl Heastie.

Hochul will inherit immense challenges as she takes over an administration facing criticism for inaction in Cuomo’s final months.

COVID-19 has made a comeback, with new cases up nearly 1,370% since late June. Hospitalizations are climbing even as schools prepare to go back into session.

Big decisions lay ahead on whether to mandate masks or vaccines for certain groups, or whether to reinstate social distancing restrictions if the state’s latest wave of infections worsens. Hochul has said she favors making masks mandatory for schoolchildren, a contrast with Cuomo, who said he lacked that authority.

The economy remains unsettled. Jobs lost during the pandemic have been coming back, but unemployment remains double what it was two years ago.

New York has also struggled to get federal relief money into the hands of tenants behind on their rent because of the pandemic, releasing just 6% of the budgeted $2 billion so far. Thousands of households face the possibility of losing their homes if the state allows eviction protections to expire.

Hochul also faces questions about whether she’ll change the culture of governance in New York, following a Cuomo administration that favored force over charm.

In his farewell remarks, Cuomo struck a defiant tone, saying the attorney general’s report that triggered his resignation was designed to be ”a political firecracker on an explosive topic, and it did work.”

“There was a political and media stampede,” he said.

Cuomo also touted himself as a bulwark against his party’s left wing, which he said wants to defund the police and demonize businesses, and boasted of making government effective in his years in office. He cited his work battling the COVID-19 pandemic, legalizing same-sex marriage and hiking the minimum wage to $15.

“I tried my best to deliver for you,” Cuomo said.

Some critics jumped on Cuomo’s remarks as self-serving.

Assemblymember Yuh-Line Niou, a fellow Democrat, tweeted he had a hundred million opportunities to improve as a leader and “Chose himself every time. Goodbye, Governor Cuomo.”

Cuomo’s top aide, Melissa DeRosa, released a statement saying the governor was exploring his options for his post-gubernatorial life but had “no interest in running for office again.”

An aide who said Cuomo groped her breast has filed a complaint with the Albany County Sheriff’s Office. Separately, Cuomo was facing a legislative investigation into whether he misled the public about COVD-19 deaths in nursing homes to protect his reputation as a pandemic leader and improperly got help from state employees in writing a book that may net him $5 million.

The switch in leadership was happening in the aftermath of Tropical Storm Henri, which narrowly missed Long Island on Sunday but dumped rain over the Catskill Mountains and Hudson Valley.

Hochul will need to quickly build her own team of advisers to steer the administration for at least the next 16 months.

Hochul, who said she didn’t work closely with Cuomo and wasn’t aware of the harassment allegations before they became public, has vowed no one will ever call her workplace “toxic.”

“I have a different approach to governing,” Hochul said Wednesday in Queens, adding, “I get the job done because I don’t have time for distractions, particularly coming into this position.”

She announced the planned appointments Monday of two top aides: Karen Persichilli Keogh will become Secretary to the Governor and Elizabeth Fine will be Hochul’s chief legal counselor.

She plans to keep on Cuomo-era employees for 45 days to allow her time to interview new hires, but said she will not keep anyone found to have behaved unethically.

Hochul, who has already said she plans to run for a full term next year, is expected to pick a left-leaning New York City politician as her lieutenant governor. Hochul once represented a conservative Western New York district in Congress for a year and has a reputation as a moderate.

“She’s very experienced and I think she’ll be a refreshing and exciting new governor,” he said.