President: Opinions of business owners will be considered in setting minimum wage 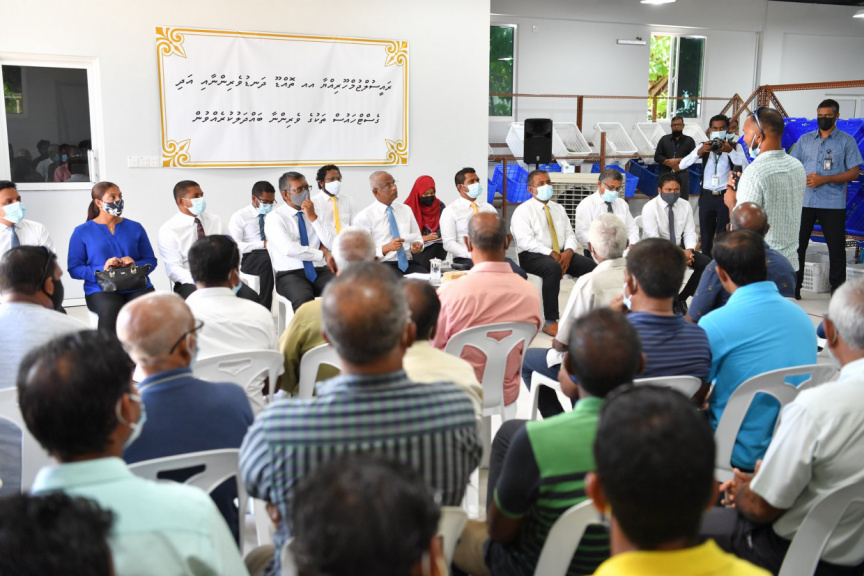 President Ibrahim Mohamed has stated that the minimum wage would be set after inquiring the opinions of business owners as well in addition to employees.

President Solih had said this during a meeting held with AA. Thoddoo farmers and guesthouse owners as part of his visit to six islands in Alifu Alfiu Atoll.

In this meeting – President Solih said that holding discussions with both employees and employers are important when it comes to setting minimum wage. In this regard, he stressed that minimum wage would be set in consideration of the opinions of both parties.

Thoddoo Council President Ahmed Karam had told Sun that President Solih had urged business owners as employers to share their views on minimum wage in addition to employees.

Minimum Wage Board finalized the amounts to be allotted as the lowest wage permitted to be paid to employees and sent their recommendations to Economic Minister Fayyaz Ismail on October 5.

As per the recommendations – minimum wage was made up for four main categories; to be based on how much an employee would be paid per hour.

In this regard, those working in small-ranged businesses will get at least MVR 6,000 as their monthly salary – for working eight hours per day.

Those working large businesses will get at least MVR 10,000 as their monthly salary – for working eight hours per day.

Minimum wage would be implemented once the Minister reviews the Board’s recommendations and passes it in the form of a decree.

The amendments made to the Employment Act by the Parliament last year stipulate that minimum wage should be set by the end of this year.

In his ongoing Alifu Alifu Atoll tour – President Solih is set to visit six islands being; Thoddoo, Rasdhoo, Ukulhas, Mathiveri, Bodufolhudhoo and Himandhoo. During these visits, President Solih will be inspecting the progress of government projects which are presently underway at those islands.