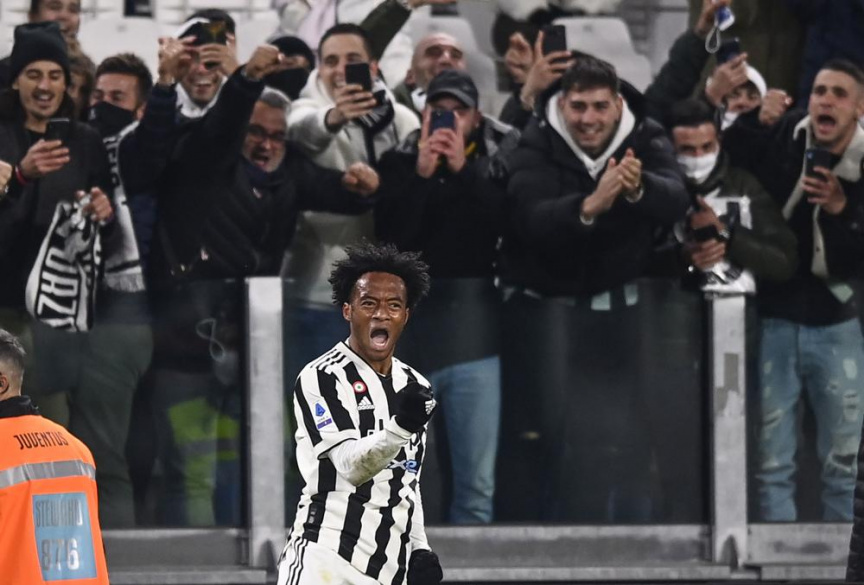 Juventus' Juan Cuadrado celebrates after scoring during the Serie A soccer match between Juventus Fc and ACF Fiorentina at Allianz Stadium in Torino, Italy, Saturday Nov. 6, 2021. (Fabio Ferrari/LaPresse via AP)

Although it was barely deserved as Juve’s struggles continued.

Juventus didn’t even have a shot on target until just before Cuadrado’s goal although it did hit the crossbar and have a goal ruled out for offside.

Those chances only came after Fiorentina defender Nikola Milenković was sent off in the 73rd minute following two yellow cards in quick succession.

Juventus moved level on points with seventh-placed Fiorentina. They are 13 points behind Serie A leaders AC Milan and Napoli ahead of the rest of the weekend’s fixtures. Milan plays Inter Milan in a derby match on Sunday, shortly after Napoli hosts Hellas Verona.

“The team was mentally in the game, which must make us smile thinking about tonight, but it must give us anger thinking about the points left behind against Sassuolo and Verona, which could be fundamental,” Juventus coach Massimiliano Allegri said.

“However, victory tonight boosts our morale and must raise the level of attention for the future even more,” he added. “The starting point for returning to being a team that aims for the top is simply running. We need desire and aggression.”

Perfect in the Champions League, Juventus was coming off consecutive defeats in Serie A. It was already without Leonardo Bonucci and also lost fellow defender Giorgio Chiellini to injury in the warmup.

Neither side had a glimpse of goal in a mediocre first half in Turin, but Juventus almost scored a stunning opener shortly after the break as Álvaro Morata chested down a ball and then hooked it over Milenković before volleying it just past the left post.

Milenković was booked in the 66th minute for bringing down Weston McKennie and he was shown a second yellow card and sent off seven minutes later for a foul on Federico Chiesa.

That appeared to spark Juventus into life as Chiesa hit the bar shortly after with a powerful shot from a tight angle before Morata had a goal ruled out for offside.

Juventus finally had its first shot on target in the 86th but Fiorentina goalkeeper Pietro Terracciano did well to parry a shot from Chiesa — who joined Juventus on loan from Fiorentina last year.

And it was another former Fiorentina player who won the match for Juventus as Cuadrado got to the byline past Cristiano Biraghi on the right side of the area before placing an angled shot into the net between Terracciano and the near post.

Atalanta moved into fourth place, two below Inter and nine behind the top two. Cagliari was three points from safety.

Atalanta was coming off a draw with Manchester United in the Champions League — one of three draws in its past four matches.

It got off to the perfect start as it took the lead in the sixth minute. Zapata was surrounded by defenders in the middle of the area so he spread it wide for Davide Zappacosta, who crossed it to the far post for Mario Pašalić to tap in.

Cagliari leveled out of nowhere when João Pedro latched onto a long Diego Godín ball over the top and raced forward before firing past the onrushing Juan Musso.

Zapata had been at the heart of most of Atalanta’s best moves on Tuesday and he got on the scoresheet just before halftime, turning Godin and drilling into the bottom left corner.

Atalanta thought it had a penalty early in the second half after Andrea Carboni kicked the back of Pasalic’s leg but after watching it on the pitchside monitor the referee rescinded his decision as the Cagliari defender had got the ball first.

Relegation-threatened Spezia beat Torino 1-0 to move out of the relegation zone.

Jacopo Sala scored the only goal of the game in the 58th minute with a fierce strike from 20 yards out.

Inter goes top of Serie A with 4-0 win