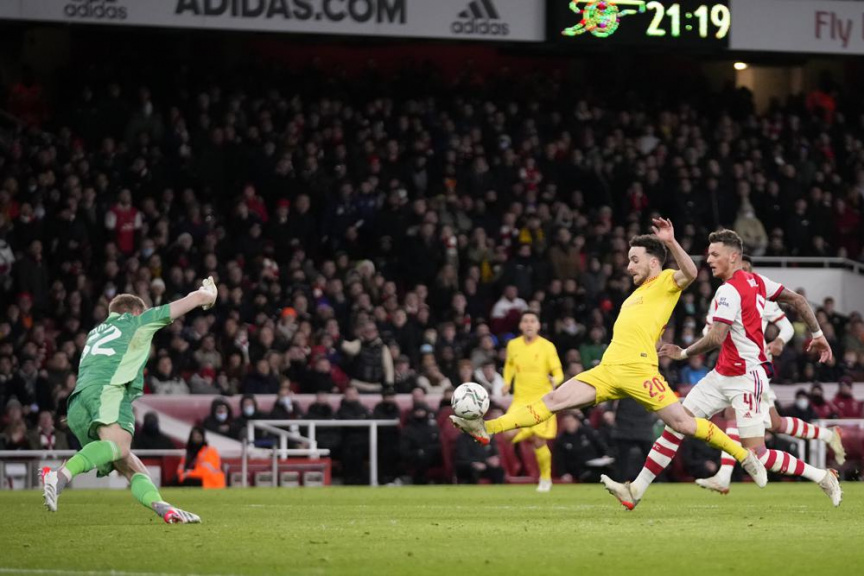 LONDON (AP) — Diogo Jota stepped up in Mohamed Salah’s absence with two goals on Thursday to lead Liverpool to a 2-0 victory at Arsenal and into a League Cup final against Chelsea.

While Liverpool coped with Salah’s continued stay at the African Cup of Nations with Egypt and Sadio Mané’s with Senegal, the rapid return of Thomas Partey after Ghana’s early exit backfired for Arsenal.

Partey came on in the 74th minute — just before Jota’s second goal — but was then booked in the 86th for a late challenge on Neco Williams and again in the 90th for a lunge on Fabinho. The midfielder was dismissed hours after landing from Cameroon and he will now be suspended for Sunday’s Premier League match against Burnley.

The semifinal was locked at 0-0 following the first leg at Anfield last week until Jota scored in the 19th with a low finish through two defenders and past goalkeeper Aaron Ramsdale. When Jota dinked the ball over Ramsdale in the second half, the goal was initially ruled out until VAR overturned the offside.

The Portugal forward now has 14 goals in 27 appearances this season for Liverpool — surpassing his tally of 13 in his first campaign after joining from Wolverhampton in 2020.

“Diogo Jota’s on fire,” Liverpool manager Jürgen Klopp said. “We were convinced when he arrived at the club he would help us massively.

“Since he is here he has made another step, he has turned into a really world-class striker. The mood in the dressing room is over the moon. The boys were exceptional.”

Liverpool, which won the Champions League in 2019 and the Premier League in 2020, is now into its first domestic final on Feb. 27 since being denied the League Cup by Manchester City in 2016.

Liverpool, like Chelsea, is still in the Champions League and FA Cup. It’s just the Premier League title that’s increasingly out of sight with second-place Liverpool 11 points behind Manchester City and Chelsea a further point behind.

But it will be a second successive season without a trophy for 2020 FA Cup winner Arsenal, which is already out of the FA Cup, is sixth in the Premier League and isn’t playing in Europe this season.

“We had chances and we were pushing for the game,” Arsenal manager Mikel Arteta said. “But we have to score the goals.”