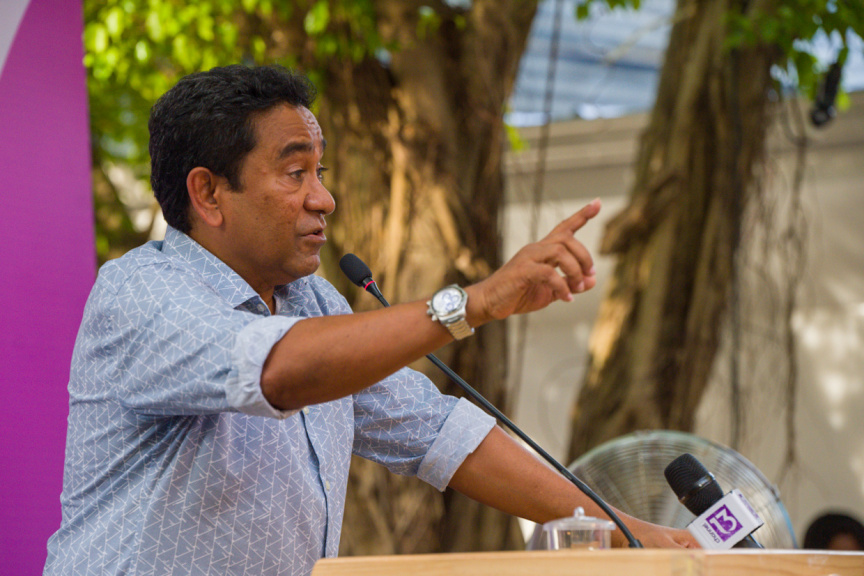 Leader of the opposition PPM-PNC coalition, former president Abdulla Yameen Abdul Gayoom said on Tuesday that the presidential decree issued to stop the ‘India Out’ movement shouldn’t be enforced.

Speaking during a campaign event for Fathimath Nazima, PPM’s candidate for the Womens Development Committee Vilimale’ constituency by-election, Yameen said the presidential decree was unlawful, and urged the police and military not to enforce an ‘unlawful decree’.

“Our party is working through official channels to hold the attorney general accountable for such matters. Because the president cannot create laws under a decree. He cannot issue orders under a decree,” he said.

“If you want to restrict freedom of expression through the Parliament, then get it done using one-fourth of MDP’s majority. Make the decision and we will obey. Because that’s that it states on the constitution.”

Yameen accused MDP of attempting to spread western influences throughout Maldives under the guise of democracy.

“Why cannot a force go and say Ibrahim Mohamed Solih is unable to govern and talk about Indian military oppression? If they can’t allow room for such discourse, then what are they saying talking about democracy?” he said.

‘India Out’ is a political campaign led by the opposition to protest against Indian military presence in Maldives.

President Ibrahim Mohamed Solih issued a decree banning the ‘India Out’ movement on April 21, deeming it a threat to national security.

However, the opposition continued to put up banners and graffiti the walls of buildings with slogans linked to the movement.

President Solih said in his decree that the ‘India Out’ movement was a deliberate attempt to hinder the longstanding relations between Maldives and India, and international efforts to maintain security in the region, and that incitement to hatred against a specific country put Maldives at risk of loss of peace and stability, huge economic and social burden, and isolation in the international arena.

Yameen: No difference between Israel and India today

'Will prioritize who got award letters but not flats'

'No indication of bribe in texts between Yameen-Naeem'