MP Shareef: Detaining people will only fill jails, not stop ‘India Out’ campaign 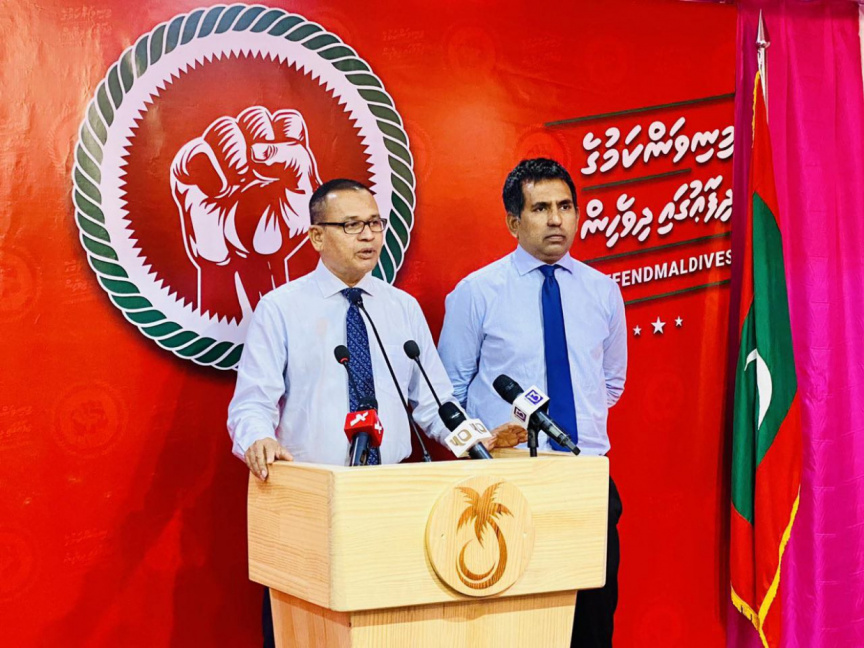 PNC’s Deputy Leader, Maduvvari MP Adam Shareef Umar has stated that detaining people in order to obstruct the opposition coalition’s ‘India Out’ campaign will only fill jails rather than stop activities carried out under the campaign.

‘India Out’ campaign by the opposition coalition comprising of Progressive Party of Maldives (PPM) and People’s National Congress (PNC) calls for the removal of Indian military personnel stationed in the Maldives.

Speaking at a press conference held at PPM’s headquarters on Wednesday – Shareef said that detaining people will stop the campaign.

“What we want to tell the government is that if Mohamed Ismail is arrested – another Ismail will be there. If one youth is detained – three additional youths will stand up in this endeavor,” he had said.

Shareef said that activities carried out under ‘India Out’ campaign will only be stopped once there is no presence of Indian military personnel in the country.

He alleged that security forces were being used without order to stop ‘India Out’ activities; an effort headed by Commissioner of Police Mohamed Hameed.

He also alleged that police had been framing youths for being involved in ‘India Out’ campaign in order to arrest them.

Maavah MP Mohamed Saeed, who also spoke at the press conference, said that President Ibrahim Mohamed Solih had Maldives Police Service at the palm of his hand.

He alleged that Indian Embassy in the Maldives had control over the Police – commanding the arrest of many innocent youths.

“We have not been denied access to biriyani, chicken eggs, breadfruit and such things. Not denied access to nuts. Even if so, there is no reason for Indian military to remain in Maldives,” he had said.

Stressing that the government was taking unlawful actions to obstruct ‘India Out’ campaign – he said there in no way to stop the activities.

The police believe Mohamed Ismail is involved in expanding and recruiting more people for the ‘India Out’ movement.

He is also accused of obstructing efforts by state authorities to stop the campaign, and preparing banners, drawings and documents linked to the ‘India Out’ campaign and distributing it within Male’ and to other islands.

The arrest warrant read that Mohamed Ismail’s actions were having a negative impact on international relations, and the diplomatic and cultural relations with neighboring countries.

President Ibrahim Mohamed Solih issued a decree banning the ‘India Out’ campaign on April 24, deeming it a threat to national security.

All state institutions have been instructed to enforce the decree.

Opposition to challenge decree on ‘India Out’ at court