Shooting and beheading suggested as methods for implementing death penalty 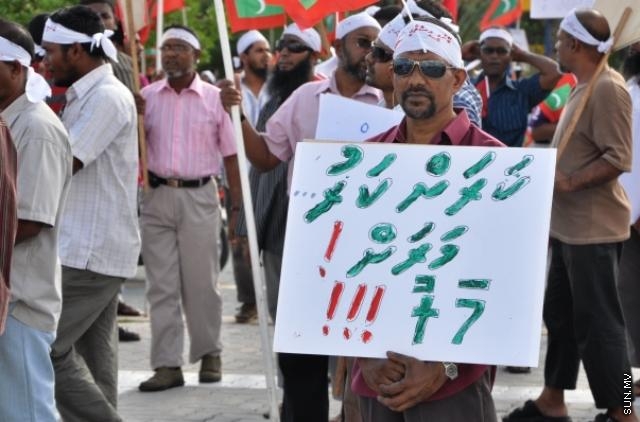 Jamiyyathul Salaf has commented on the Bill on the Penalty for Murder and Other Principles Governing the Crime of Murder, suggesting that the death penalty be implemented through beheading by the sword and through shooting by guns, as alternative methods to lethal injection.

A letter sent to the Attorney General’s Office from the organization stated that the purpose of implementing of penalty may only be fulfilled if the living may learn a lesson from its practice. The letter stated that decapitation by a sharp object is the most effective, reasoning that it is the least brutal and subjects the least amount of sensation to the convict, and that it will also bring warmth to the hearts of the relatives of the victim of the crime.

The letter also stated that executions by shooting with guns are also viewed as acceptable by religious scholars.

The organization stated that subjecting a person to lethal injections and electricity are against the principles of levying punishments in Islam, and that an exception to these principles can only be made if the person who commits the crime is sentenced to be punished in the same manner as he committed the crime.

The letter by Jamiyyathul Salaf opposing the lethal injection stated that lethal injections will not kill a person instantly. Giving reference to research, the letter stated that 3 injections have to be administered for a person to be executed, and that the degree of effect of the poison on the person will depend a person’s physical build-up. They said that executing a person by a single injection is not often practiced, even in the U.S.

“If that happens, it is a huge injustice. It is very dangerous that such a bill be framed in such a way that allows one government to implement the death penalty and another to show excuses against it to forego implementation. It will not be acceptable. It should be noted that there are countries around the world that are unable to continue executions by administering legal injection due to the unavailability of such injections,” stated one of the comments submitted by Jamiyyathul Salaf.

The organization has submitted 36 comments to the bill, which consists of 46 articles. The letter from Jamiyyathul Salaf to the Attorney General’s Office also stated that it is unacceptable that the bill was first drafted without proper consultation with religious scholars.

Maumoon decides not to compete in presidential primary