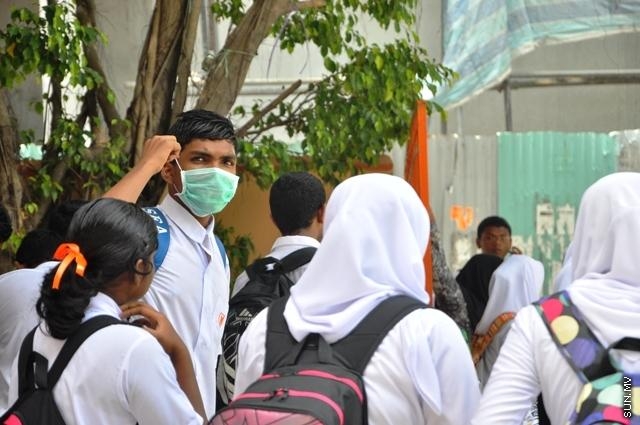 A number of children from Imaduddin School were given emergency care today after being affected by smoke rising from the garbage dumb area near the school.

The smoke that started to rise around 10:30 this morning caused nausea and dizziness to some students, causing 50 students to seek care from the health room. A teacher was also promptly taken to the hospital after her health suddenly deteriorated.

Imaduddin School Principal Ibrahim Asif Rasheed said today that they currently hold school sessions after considering the weather and wind direction and that they are forced to cancel sessions on days when the wind is strong. He said that the health problems arose today after the wind had picked up rapidly.

Ibrahim Asif said that the school was engulfed in smoke around 10:30 am this morning.

He said that the school called and asked the parents to come and collect their children as soon as they saw signs that the children were suffering from the smoke. He said that as the morning session concluded halfway, they will not be able to continue sessions during the afternoon.

Sessions can be commenced tomorrow after contacting the meteorological centre and clarifying the conditions for tomorrow, he said

Finance Ministry has granted MVR 8 million to carry out temporary measures to solve the problem of the overflow of the garbage dump area in Male’. The project is currently underway.

Unable to proceed with Nasheed