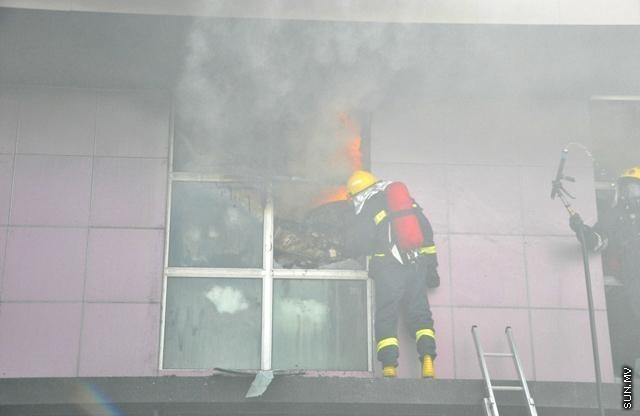 Maldives National Defence Force has said that a fire has taken place in Henveyru Sakeena Manzil and that they are currently working on controlling the fire.

The section which holds Park Way 3 in Sakeena Manzil has caught on fire. MNDF and Police personnel are active in the area.

15:07 - MNDF has said that their Fire and Rescue Service reports that 90 percent of the fire inside H. Sakeena Manzil second floor is now under control.

MNDF fire team has entered the area where the building has caught on fire. They entered after smashing the glass windows facing the main road.

The fire is now a bit under control, but there is still smoke coming from inside the building.

"The area that caught on fire held a large quantity of tires and plastic goods. As of yet, there have been no reports of anybody being injured" - Media Officer Abdulla Ali

15:33 - Police have said that all residents of H. Sakeena Manzil have now been evacuated and that nobody has been injured so far.

"The fire caught in H. Sakeena Manzil is now under control, but there is smoke coming out from inside to some extent." - @PoliceMv Tweet.

There is smoke originating from inside the section to a certain degree. There is no sign of fire now. MNDF fire team has removed materials such as wooden planks from the inside the area.

MNDF has geared two people with masks and oxygen tanks and has led them inside the burned building. The purpose is to save some very important objects stored inside. The people are two known Progressive Party of Maldives (PPM) activists. PPM had conducted their office in Sakeena Manzil previously. The whale submarine operation office owned by former PPM deputy leader is also located in the same building.

Attempts to allow one of the locals into the burned building -- Sun photo: Fayaz Moosa

The two people who went inside the building have come out carrying the objects they wanted to save. It is however not yet clear what those objects are.