There will be no chance for Nasheed to reach power: Jameel 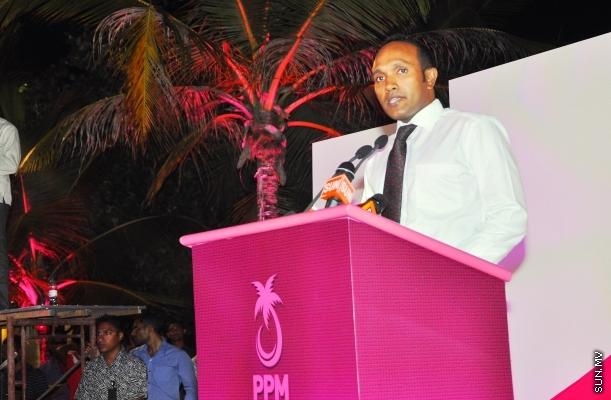 Home Minister Dr. Mohamed Jameel Ahmed has said that former President Nasheed will not have a chance to come back to power and that he will not allow the space for that to happen.

Speaking at a rally held by Abdulla Yameen’s “Yageen” campaign team in Artificial Beach last night, Jameel said that said it a task that is left up to the Home Minister and that he has to do it because it is “our religious and national opportunity,” Jameel said.

He said that they are currently in the process of carrying out that particular work and that as we are Muslims, we must always try to choose what is right.

“There is no doubt that no matter what path he takes to reach the 2013 presidential election, there will be no opportunity for Mohamed Nasheed of G. Kenereege to reach the Maldives presidency. We will not allow that opportunity. It is something that we have to do today. We have to do it because it is out religious and national opportunity,” said Jameel.

Minister Jameel said that “if we complete that task”, God will grant success to those leaders in the upcoming presidential election.

He said that the country stands where it is now as a result of the dedicated hard work of people who struggled for it and that one of the most important characteristics needed to attain to power is dedication, and that it is also important for a person to work with dedication after he leaves power. He said that former President Nasheed’s government could not show such dedication.

Speaking at Yameen’s Yageen campaign podium for the first time, Jameel said that our country had come this far as a result of the blood that our ancestors sacrificed for the country. He said that the country’s circumstances have changed and said that today we face threats to our independence.