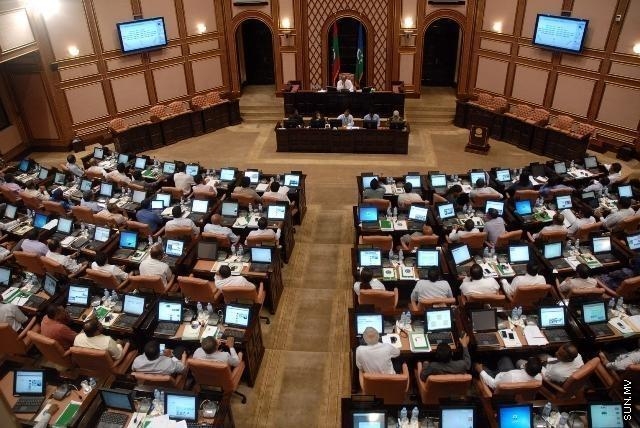 Parliament has come to a halt today due to the ruling made by the Supreme Court declaring that a decision previously made by the Parliament to remove Civil Service Commission (CSC) President Mohamed Fahmy Hassan from office was invalid. The Parliament session ended to pursue discussion with the political party leaders to find an amicable outcome to the issue.

Parliament session was suspended earlier today after Maldivian Democratic Party (MDP) Parliamentary Group Members started calling for points of order in protest of a ruling made by the Supreme Court that stated that the Parliament decision to remove Fahmy from office was unconstitutional.

After resuming the session, Deputy Speaker of Parliament Ahmed Nazim who was chairing today’s session, said that the Supreme Court ruling that stated a matter which the Parliament had full prerogative over as unconstitutional, was something that needed to be given “wider consideration.” Nazim ended today’s session on this note, saying that discussions between party leaders will follow.

Deputy Speaker Nazim said that the issue has now been forwarded to the Parliament Committee on Independent Institutions and that the Chair prefers the session to proceed after obtaining an opinion from the Committee.

“The chair does not consider the raising of the issue to be related to the issue of removing Mohamed Fahmy Hassan from the Civil Service Commission. This issue is something that we have to give wider consideration. Because the it has come up due to a ruling made in relation to a decision that was made by the Parliament within its full jurisdiction. In order to hold discussions with the political parties in the Parliament and as the issue has now been put on the agenda of the scheduled Independent Commission’s Committee today, the Chair wants to proceed with the issue after obtaining a words from the committee, and so the session has now come to an end,” said Nazim.

Under allegations of sexual misconduct, Parliament had voted with a majority of 38 votes in favour of removing Civil Service Commission President Mohamed Fahmy Hassan from office. The case has also been reviewed by the Parliament Committee on Independent Institutions on a previous occasion.