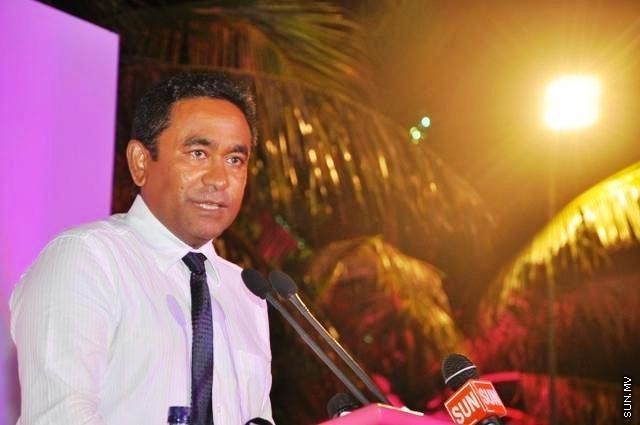 Progressive Party of Maldives (PPM) Primary Election candidate Abdullah Yameen has said that he has been accused of several things including holding large sums of money saved in foreign banks, and assured members of PPM that that these allegations are baseless and unfounded.

Yameen said this while speaking at a rally by Yageen Team in Addu City last night as part of the Primary Election campaign.

Yameen said that even though he is part of a large party such as PPM today, he was a member of a much smaller party earlier, and that he tried to explain the truth to the people back then after such allegations were made against him.

“I have been accused of holding large sums of money in difference accounts. I’m not responding to these allegations. But the people who work with me need public confidence. I said even earlier, I would not be caught up in something like that. Today I want to say to you, that there are several allegations targeted at me. But those allegations are baseless and unfounded. None of those stories are true. Don’t believe them,” Yameen said.

Yameen was praised by several young people who spoke at last night’s rally, and Yameen referred to this and said that he may not be able to accept constant and nonstop praise, but constant criticism may at the same time lead to displeasure.

“At rallies like this I often hear about my services. I feel disinclined to sit and listen when people talk about my services. But this is a practice introduced by young people. But before they take it too far, I want to say, I may not be able to accept continuous praise; but at the same time, continuous criticism could also lead to displeasure,” he said.

Yameen said that he is nonetheless willing to walk with the people who support him, and that if the people forgive him, he would also forgive the people.

Yameen referred to reports that politicians and affluent people in Male’ bribe young people to have them commit serious crimes in Male’, and urged young people to reject such offers by political party leaders or other senior people, and work towards building a bright future for themselves.

He said that if PPM wins the Presidential Election this year, Maldives would experience prosperity similar to, or even better than, the earlier thirty years.